Sinagoga de Córdoba or Córdoba Synagogue is a historic Synagogue built in 1315 in the Jewish Quarter of Córdoba , Spain. It is one of the only three originals remaining in Spain. It is located in the Historic centre of Córdoba, northeast of the Mezquita Catedral. It is part of the historic centre of Córdoba which was named a World Heritage Site by UNESCO in 1994. It is the only synagogue in Córdoba to escape destruction during years of persecution. Although it no longer functions as a Jewish house of worship, it is open to the public.

This neighborhood is also home to the statue in honor of the wise Jew Maimónides. In 1935, the Spanish authorities marked the eight-hundredth anniversary of Maimonides’ birth by changing the name of the square in which the synagogue is located to Tiberias Square, honoring the great native-born philosopher, who is buried in Tiberias. At this celebration the first Jewish prayer service in 443 years to occur openly and with full knowledge of the authorities was held at the synagogue.

Built between 1314 and 1315 and at that time was one of dozens of synagogues in the city. The synagogue’s small size points to it having possibly been the private synagogue of a wealthy man. It is also possible that Córdoba’s complex of buildings was a yeshivah, kollel, or study hall. Another possibility is that this was the synagogue of a trade guild, which converted a residence or one of the work rooms into the synagogue. The synagogue was decorated according to the best Mudejar tradition. It was an intellectual stronghold in the time of Abderramán III.

The building served as a temple  until the final Jewish expulsion in 1492. After the expulsion of the Jews in 1492, the synagogue was seized by the authorities and converted into a hospital for people suffering from rabies, the Hospital Santo Quiteria.

It was declared a National Monument in 1885. Since then it has undergone several phases of the restoration including that of Felix Hernandez in 1929. Another restoration was begun in 1977 for the reopening of the building in 1985 to celebrate the 850th anniversary of Maimonides birth.  It underwent its final major restoration in 2018.

What to see at the Sinagoga de Córdoba

The layout of the Synagogue follows Talmud tradition which states that access to the prayer room is made through a courtyard and a hall, without direct access to the street. The patios served as a transit between the exterior bustle and the internal recollection that must be respected in the worship space and also acted as elements for structuring and articulating the communal spaces, be it the oratory itself, the Talmudic school or the dependency of the rabbi, who used to occupy the annexed buildings.

So you walk though the small patio to access to a small hall. To the right of it go up the stairs that give access to the female area. To the front is the main room which has a square floor plan and is decorated with Mudejar decorative motifs. The wall that supports the women’s tribune opens with three  arches decorated with plaster work with inscriptions from Hebrew psalms and others with plant motifs on the upper part. Its main beautifully restored wall, has a semi-circular arch where a chest with the Holy Scrolls of Law used to be kept.

The following inscription was found in 1884, and is located on the main wall of the prayer hall, which faced Jerusalem. It dates the original building to 1314 and 1315 and it says:

Shrine in miniaturration and dwelling of the Evidence completed by Isaac Mohed, son of Lord Efraim Waddawa. [Built] in the year seventy-five. Pay attention, O God, and hasten to rebuild Jerusalem.

Best Tours of the Sinagoga de Córdoba and the Surrounding Area?

There a a number of tours of the Sinagoga de Córdoba and the surrounding Jewish quarter. Here are a selection of our recommended tours:

How to get to the Sinagoga de Córdoba

Getting to the Synagogue of Córdoba is very easy, as it is located near Conde Vallellano Avenue. The Synagogue is located behind the Red Cross Hospital, in the middle of the Jewish Quarter.

By Car: you should be able to park in the Parking of the Victoria Avenue or the one in the Doctor Fleming Avenue.

Free admission for EU Citizens. 0,30 € for the rest 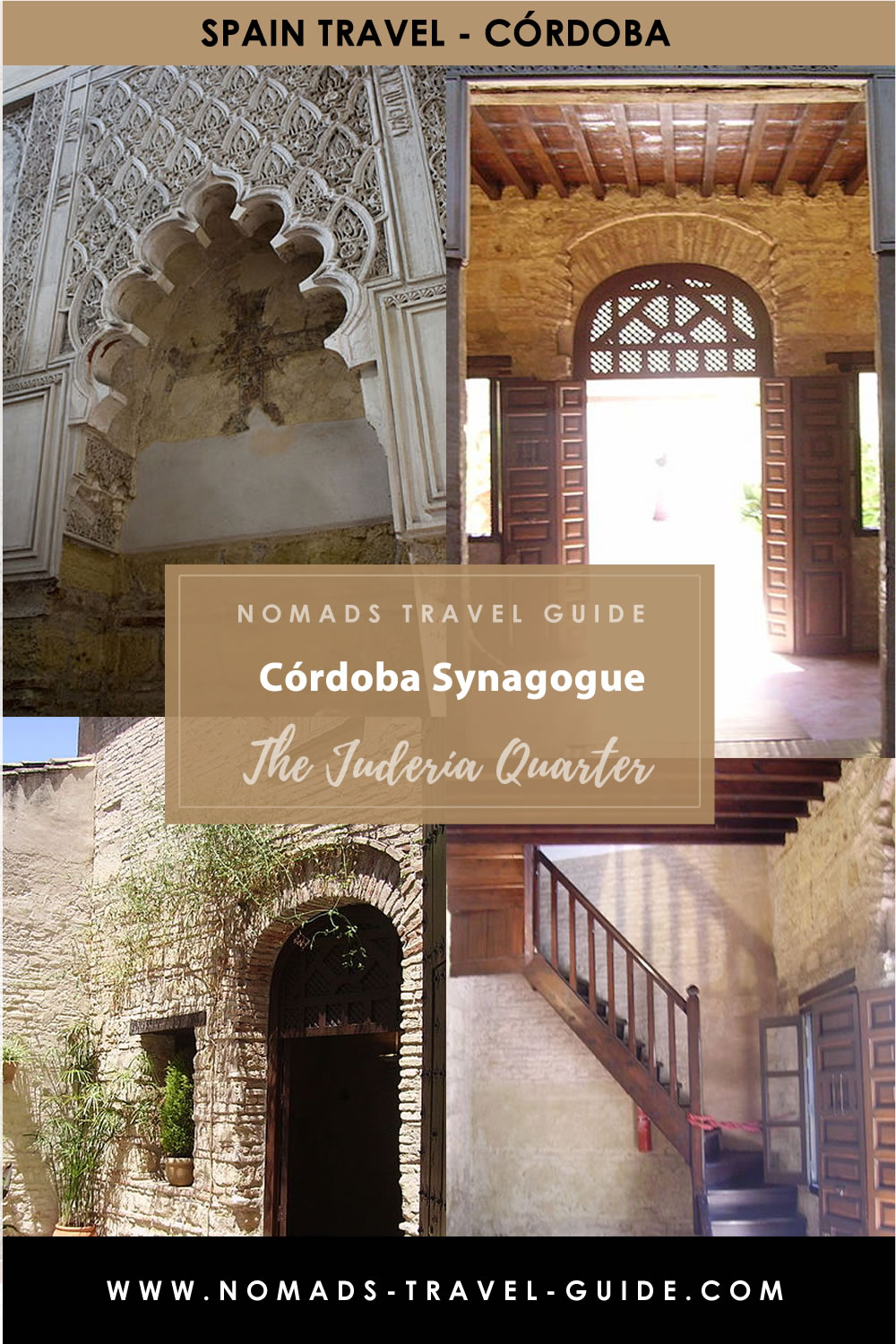