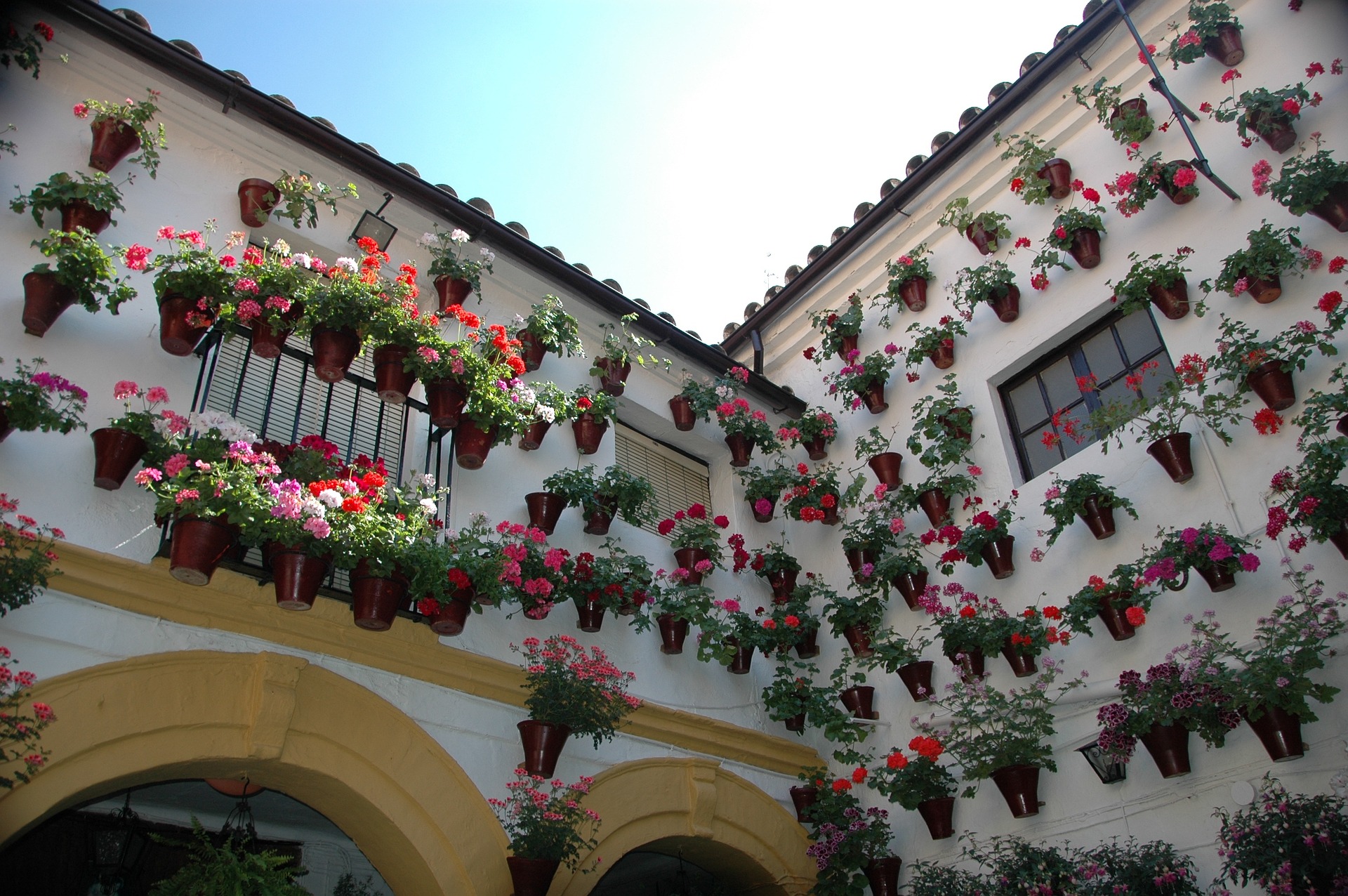 Every year, in the first half of May the Festival of the Courtyards or Patios is held in Cordoba. All the owners participating in the contest open up their courtyards for the public to visit. The tradition which was declared a part of our Intangible World Heritage by UNESCO in 2012. The festival is a competition allows you to discover the most beautiful courtyards in the “historic quarter” city and also experience the streets full of color, smell the scent of jasmine and orange blossom and hear the strains of flamenco.

History of the Patios in Cordoba

The verdant patios and courtyards of Córdoba arose out of necessity, due to the unbearable heat and dryness of the Andalusian summer. The ancient Roman and Greek inhabitants of Cordoba started building their houses with a central patio and decorated with water fountains or wells. During the time of the Moors, the patios would include plants and trees, which helped keep local homes even cooler and more sheltered from the hot sun.

Soon after, the patios started being decorated with flowers, which gave birth to the patios as we know nowadays. In 1918, the first Patios Festival took place in Cordoba, and in 2002 the UNESCO inserted it the Representative List of the Intangible Cultural Heritage of Humanity.

Types of Patios in Cordoba

There are usually two types of patios in Cordoba. The first one is the private patios which is owned and tended by a single family whose rooms are located around the patio.

The second, is a larger communal space called a neighbors house or casa de vecinos. Many years ago the large population of the city and growth in a short space of time made space become a premium. So families lived in these buildings and shared the patio, the central courtyard. These tend to be much larger and more elaborate, with long balconies, a communal wash room with adorable wood scrub boards and perhaps a fountain and decorative cobblestones.

With both types of patios they didn’t much space, so they made best use of the walls and decorated them with potted plants.

Exploring with someone who knows the history and has experienced the culture of the courtyards is one of the best ways to understand and value it. There are different tour companies and organizations which offer multiple experiences and guided visits to patios throughout the year. Here are our recommended tours:

Obviously the best time to experience the patios of Córdoba is in the first few weeks in May, when the Festival is on.  During the festival there are more than 50 courtyards of  flower-filled oases, open to the public. This calm, pastoral visit of the city is also an opportunity to chat with the residents and gardeners, who get prepared all year round to offer the best sight of colorful flowers.

Alongside the competition, the Patios also host some free events. The most picturesque ones are undoubtedly those about the Flamenco traditions, which give birth to a “es la fiesta de los patios de Cordoba” or the party in the patios that lasts two weeks!

You can experience Cordoba’s legendary courtyards all year round. One of the most beautiful Patios in town now harbors an interpretation center providing in-depth information about Cordoba’s beautiful Patios and the tradition of the famous Patio Festival.

In the Plaza de Don Gome stands the traditional Andalusian Renaissance mansion known as Palacio de Viana, or Viana Palace. The palace not only harbors a museum, but has twelve magnificent courtyards or patios and is often called the Patio Museum. The different floral species decorate and perfume each corner of the beautiful museum.

El Zoco is a Crafts Market set in a 16th century manor house located in the heart of the Jewish quarter and is ope all year around. The souk is located on two floors around a traditional white rectangular patio with wall-flowers. This is a beautiful market with many amazing artisan stores.  It is a great attraction during the patios contest in May.

Read more about the El Zoco

The Villalones Palace, also called Orive Palace, is an old Renaissance palace located in Orive Square in the San Andrés-San Pablo neighborhood of Córdoba. The building, designed by the architect Hernán Ruiz II, was built in 1560.

This building comprises two patios, around which are the many rooms of the house. Even though its floral decoration is not excessive the visitor can find most traditional plants of Córdoba such as geraniums, gypsies and pilasters.

The Casa Andalusí is a house-museum  located in a restored 12th-century house in the Jewish Quarter. This building recreates an ambiance of caliphal times. A highlight is its central patio with a tinkling fountain. It also offers a variety of exhibits, mainly relating to Córdoba’s medieval Muslim culture, as well as a Roman mosaic in the cellar.

Read more about the Casa Andalusí