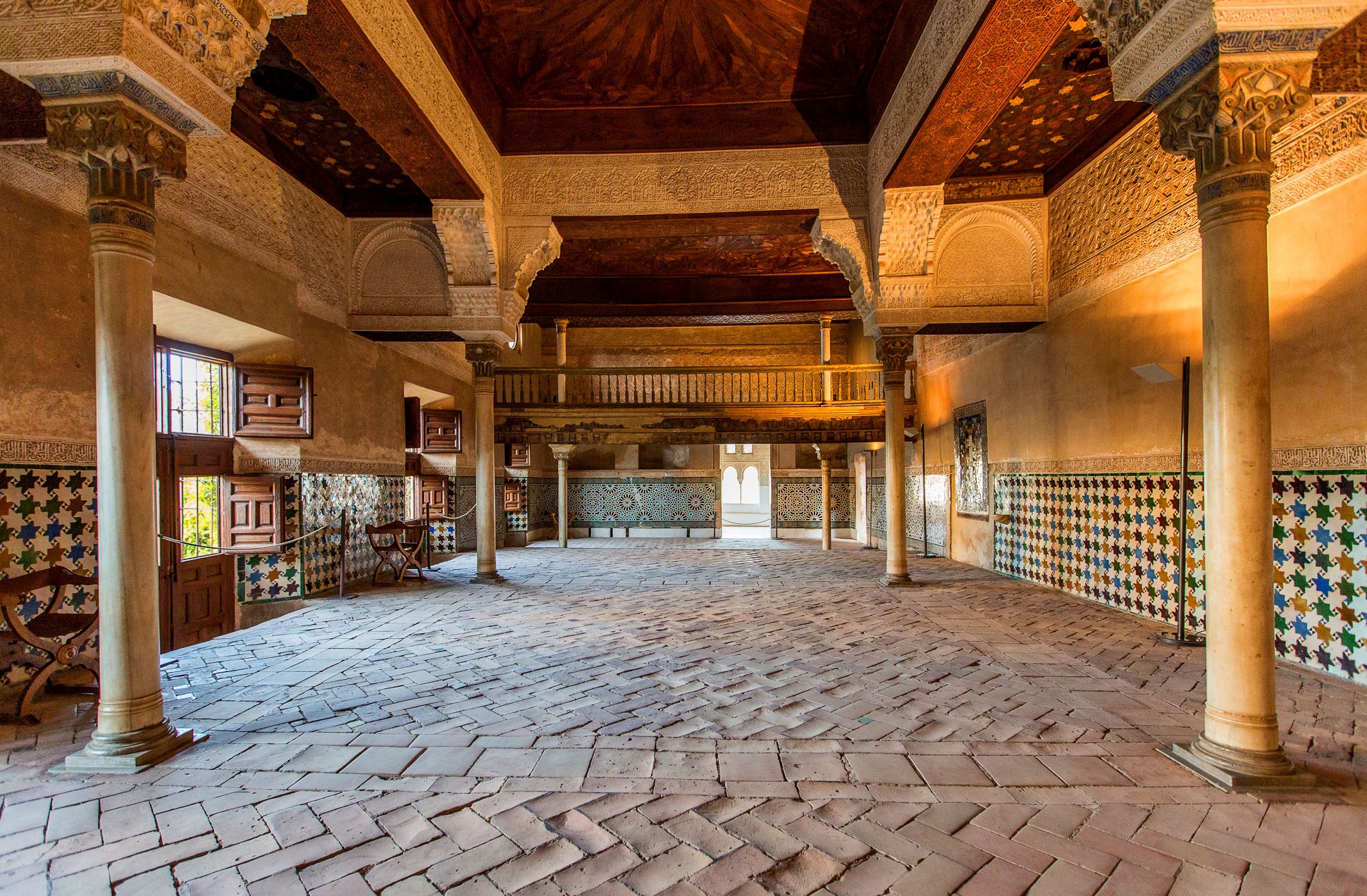 The Mexuar was the first palace to be built by Ismail I at the start of the 14th Century. This became the semi public part of the palaces administering justice and controlling state affairs. It was partially destroyed by Yusuf II when he built the Comares Palace behind it in the mid 14th Century. This became the official residence of the ruler. The Palace of the Lions was added to this at the end of the 14th Century by Muhammad V and was the private area where the harem was and included the Royal baths.

While waiting to enter the Nasrid Palaces you will see stone walls in a garden. This was the Madrasa de los Principes, and at one time the main entrance to the Mexuar.

La Madraza was a school for studying science and philosophy. The Madrasa de los Principes or Madrasa of the Princes was exclusive for the children of the family of the Kings. There are only remnants of the Madraza left, but it probably contained a study hall, an oratory, and rooms for those who worked there. You can see one room that is at an angle, this would have been the minaret which points to the rising sun in a south easterly direction.

In Granada books and study were very important. Many manuscripts were translated to disseminate knowledge and information. Unfortunately not many of the manuscripts have survived because when the Christians conquered it, they burned many of them.

The Patio of Machura

The next part of the Mexuar we come to is the Patio of Machuca, at the moment this has a portico to the north and hedge to the south and west.

The Patio of Machuca would have been a courtyard with buildings or Porticos built around it. In the center, would have been a pool shaped like the Roman nymphaea. Water would flow into it from the various round fountains flowed into the pool. The cypress trees to the south were planted at the beginning of the last century to simulate the portico that would have stood there, miroring the portico to the north.

It is called the Patio of Machuca as this the architect of the Palace of Charles V, Pedro Machuca lived in the small tower to the North. You can see the Patio of Machuca from just before entering the the main entrance to the Mexuar, of from the windows in the Sala de Mexuar.

Behind the northern portico of the  Patio of Machura you can see the roof of the Torre de Manchura. This is where Pedro Machuca, and his son Luis Machuca lived.

At the normal entrance a passage leads directly into the Sala del Mexuar.

This room is the first one that you will enter in the palace. It was used as a council chamber and as a waiting room for the people who wanted to see the Sultan after climbing up  from the Albaicin through the Gate of Arms. Most of the public would not have been allowed beyond this point. The chamber has been altered considerably since the time it was built.

In the 16th century it was converted into a baroque chapel to celebrate the visit of King Philip IV. A second story was added behind the wooden balustrade, for the choir to be sat. Two coats of arms were added to the south wall which would have formed twin Hercules Columns on them with the missive “Plus Ultra”, with a crown above them. One has now been moved to the east wall, as it was moved when the entrance way was added. You can see its crown carved into the stone, above the doorway.  The alter would have been positioned between the two.

At the far end of the Mexuar a new entrance leads into the Oratory, a small, narrow room whose outer wall is in effect one long balcony, though divided into twin windows. The mihrab is accurately placed and points ESE; it is built as a horseshoe arch, richly ornamented, and bears Arabic inscriptions, of which the aptest is that which says, ‘Don’t be one of the remiss. Come to prayer.’ This is only one of the spots from which a glorious view of the Albaicín and the mountains can be enjoyed, though a wider panorama will present itself later.

The Patio del Cuarto Dorado or Patio of the Golden Room is small and plain. During the Christian period wooden gallereies connected the higher chambers. The floor is laid with white marble slabs and a low, shallow fountain of darker marble in the form of a scalloped bowl plays in the center. The fountain is a reproduction with the original being moved to the Jardín de Daraxa.

Geometric tile mosaics adorn the lower walls and patterned ones surround the rectangular doorways. The one leading north into the Patio del Cuarto Dorado is a horseshoe, on slender columns with mocárabe or stalactite imposts. The upper windows are once more partly ajimez, with wooden jalousies.

The Cuarto Dorado or Gilded Room is so called because of the beautiful coffered wooden ceiling, which was gilded and redecorated in the time of the Reyes Católicos (Catholic Monarchs. It is a small room entered through a series of three arches; it is in line with the Oratory, at the back of the mihrab, and has the same glorious view from its windows. It was decorated in the Mudéjar style by the Catholic Sovereigns.