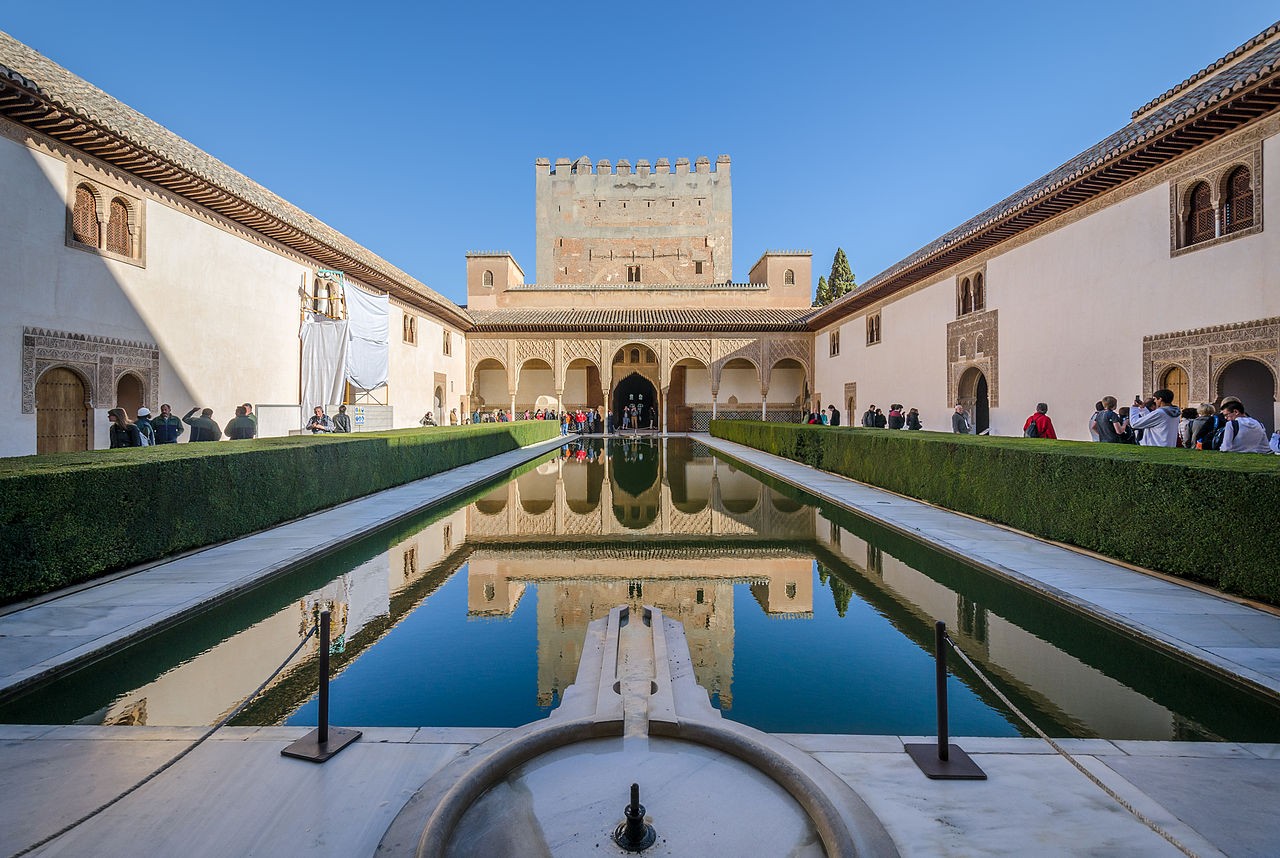 From the flamenco bars to the Alhambra palace, read ‘The Nomads Travel Guide‘ to the top sites and attractions this city has to offer.

The Alhambra Complex is Granada’s most popular attraction and one of its most iconic sights. It is the greatest surviving relic of southern Spain’s 800 years under Nasrid  and Moorish rule, which spanned from the 8th through to the  15th centuries. The sprawling complex sits on top of the La Sabika hill looking down on the Darro Valley, the snowy peaks of the Sierra Nevada hover in the background. The original fortress of the Alcazaba dates back to the 9th century, and was extensively rebuilt in the 1200s by the Moorish Sultan Mohammed ben Al-Ahmar. Particularly beautiful are the Nasrid palaces; built by subsequent Nasrid Kings – the last Moorish Sultans of Al Andalus– during the 13th and 14th centuries, with its palaces, towers, royal apartments and gardens show the splendor of the time.

Read more about the Alhambra Complex

The Generalife was the Summer Palace of the Nasrid sultans of the Alhambra. Its exquisite gardens provided a cool haven for the sultans during the heat of Andalusian summers by using water as a central theme, with reflecting pools and fountains which offset the intense heat.

Read more about the Generalife

El Albaicín is the old Moorish quarter of the city and no visit to Granada is complete without walking along its narrow streets, winding cobbled streets, whitewashed houses and jasmine-scented squares. The hand-painted Moorish tiles adorning the walls here are very pretty and worth a close look.

It’s perched on a hill facing the Alhambra on the other side of the Darro River. The exertion required to walk to the top to find its most popular square, the Mirador San Nicolás,  with the views of the Alhambra and the Sierra Nevada ia well worth it.

There is also a flea market every Saturday morning on Plaza Larga, one of the barrio’s prettiest spaces.

Read more about the Albaycin

Granada’s Cathedral is located at the center of old city and was built on top of it’s mosque at the start of the 16th century. This magnificent building is Spain’s second-largest cathedral. It was erected during a transition in architectural design, so the foundations are Gothic while the main structure and interior are Baroque.

Work began in 1518 and it took over 180 years to build, although it’s still not completely finished as out of the two 80-meter towers which were originally planned, only one was ever finished.

The glass windows of the upper part add light and color to the whole. Medrano and Mena sculpted the statues of the Catholic Monarchs and Alonso Cano the busts of Adam and Eve. The side chapels contain marvellous works of art. In the sacristy, there is a figure of Christ by Martinez Montañes, an Annunciation and a valued image of the Virgin Mary by Alonso Cano, together with other valuable objects of the Cathedral Museum and Treasure.

Read more about the Granada Cathedral of the Incarnation

The Royal Chapel or Capilla Real is located between Granada Cathedral, the old Fish Market and the Church of Sagrario. Its construction was ordered by the Catholic Monarchs in 1504 as a place of burial for their bodies although they dies before it was complete. Their bodies rested in the convent of San Francisco de la Alhambra until the Royal Chapel was completed, then they were moved here. Their beautiful alabaster tomb was designed by the Italian sculptor Domenico Fancelli.

The chapel also contains the tombs of their, successors Joanna of Castile and Philip I, as well as their grandson, Miguel da Paz, the Prince of Portugal who died in infancy.

Read more about the Royal Chapel of Granada

The Banuelo dates from around the 11th century and its elegant Moorish archways and domed ceilings are still amazingly intact after a thousand years. About halfway along the Carrera del Darro, tucked away underneath a private house, are the oldest and best-preserved Arabic baths in Spain.

The baths were used by the moors to cleanse and purify their bodies before entering the Mosque. The puritanical Christians believed this to be decadent and heathen behavior, so after the reconquest destroyed many of these buildings.

The columns supporting the arches inside have capitals that once belonged to Visigoth and Roman buildings. All the chambers have star-shaped openings in their ceilings, creating eerie shafts of sunlight.

Read more about the Arab Baths of Granada

The Dar-al-Horra Palace is located high up in the Albayzín. It is a 15th-century Nasrid palace, which was home to the was the home of sultana Aixa, the mother of Boabdil, the last King of Granada. The palace is surprisingly intimate, like most Nasrid palaces its rooms are set around a central courtyard with fabulous views across the surrounding neighborhood and over to the Alhambra.

On the other side of the patio, there is a Christian chapel, with a beautiful wooden ceiling.

The La Cartuja Monastery is located on a panoramic hilltop two miles from the city center, it was built 16th and 18th centuries by the monks themselves. This monastery features an imposing sandstone exterior and some incredibly lavish baroque decor.

One of the highlights is the sagrario behind the main altar in the church, which has a ensemble of colored marble, columns and sculpture capped by a beautiful frescoed cupola.

The La Cartuja Monastery is one of Spain’s baroque masterpieces, with eruptions of lush decoration that will leave most visitors awestruck.

Read more about the Monastery of Cartuja

Scramble ever higher up the hill above the Albaícin district and you reach Sacromonte, home to the city’s gypsy community and the heartland of flamenco.

Many residents still live in cave houses, burrowed into the rock, and the main street has lots of flamenco shows to choose from.

If you arrive in Sacromonte at duck it will be at the right time to enjoy the breathtaking views over the Albaícin and the Alhambra, before soak up the vibes at one of the nearby flamenco shows.

Read more about the Sacromonte

The Corral del Carbon was a corn exchange built in the fourteenth century by Yusuf I, and was a public building for hosting merchants and their products were to be sold at an auction.

It changed to be a coal exchange after the Christian conquest and changed its name to that. Later in the sixteenth century, Christians adapted it for stage performances.

The construction consists of a beautiful double-arched gate and an inner body with a courtyard surrounded by galleries and craft rooms. Today the courtyard occasionally hosts plays and flamenco shows on summer evenings.

Granada’s Science Museum is located just a 15-minute walk south of the center of the city. It is probably the most stimulating museum for children in Andalucia.

The museum covers topics such as how to better understand the world we live in, physical phenomena such as gravity and the movement of the Earth. There are two main buildings: The Macroscopio has a diversity of exhibits including a “Journey into the Human Body” and installations that recount the achievements of Al-Andalus’ Islamic scientists and the Pendulum Building which covers physics, chemistry and mechanics and also holds the planetarium.

The Alcaicería market was the Original Moorish silk market covering a range of streets between the Plaza Nueva and Plaza Bib-Rambla. It was filled with Arab silk stalls, spices and other valuable goods, now however the only remaining part is the Calle Alcaicería. It is a collection of narrow lanes of local shops selling a variety of Arabic and Spanish crafts from traditionally painted ceramics, inlaid wood and stained glass lamps.

Read more about the Alcaicería

The Carmen de los Mártires are peaceful gardens, located on the hillside to the south of the Alhambra. These romantic looking gardens sprawl around a restored 19th-century mansion. The space has views of the city and surrounding mountains. Over the years the site has been a Moorish Proson, a chapel, a convent and a summer house.

The Palace of Charles V, Holy Roman Emperor is a huge Renaissance palace placed in the middle of the Alhambra.  The palace, begun in 1527 by Pedro Machuca, an architect from Toledo who studied under Michelangelo. The building has never been a home to a monarch and stood roofless until 1957

Inside are two museums: the ground-floor Museo de la Alhambra or Museum of Alhambra and, upstairs, the Museo de Bellas Artes or the Fine Arts Museum.

Access to the Palacio de Carlos V is free.

The Realejo of Granada was the old Jewish neighborhood of Muslim Granada. Spread out between Granada’s two rivers—the Darro and the Genil, it is a labyrinth of steep and narrow streets.

Read more about the Realejo

Save this article to read later by saving it to Pinterest.