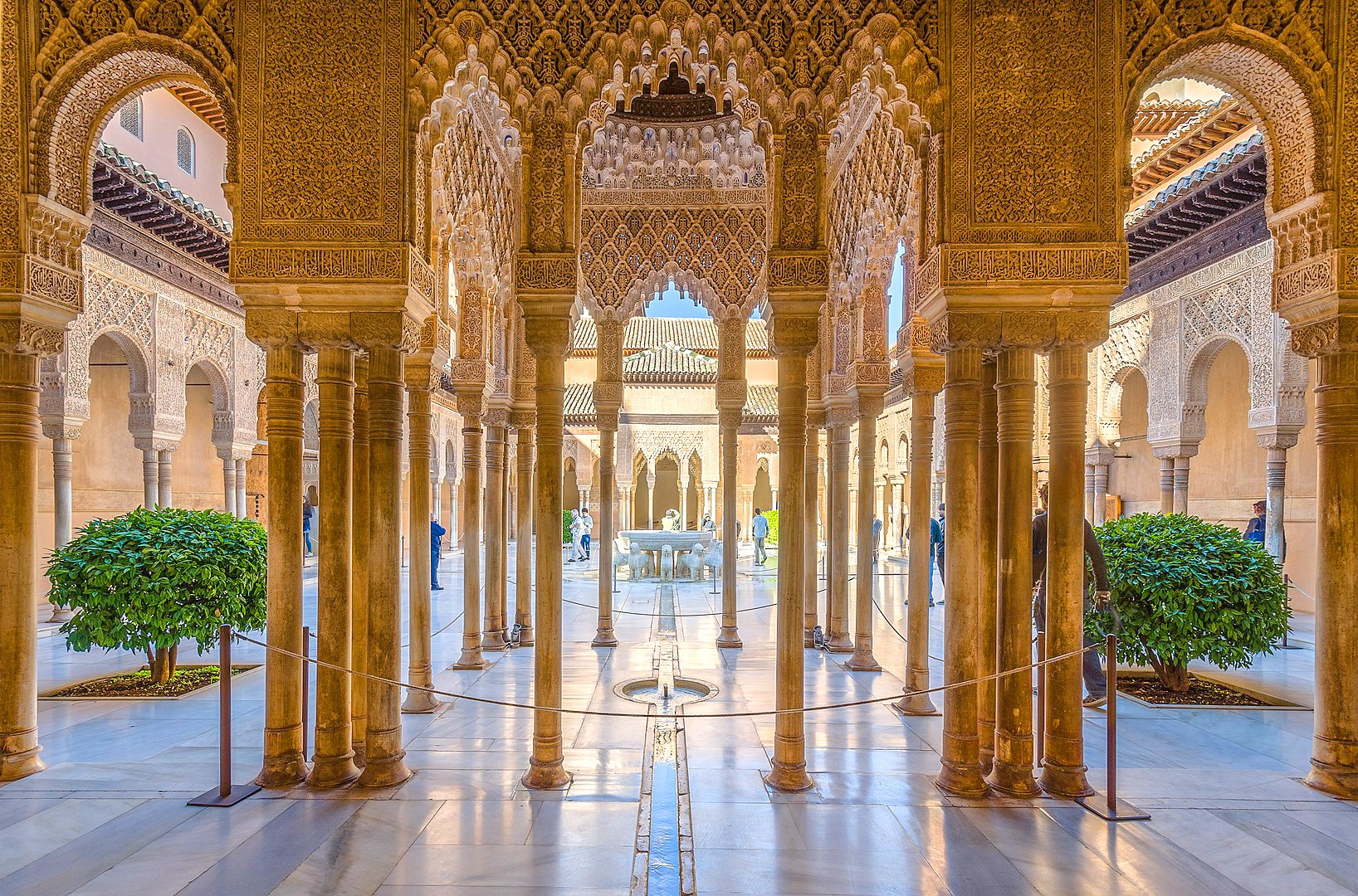 The Nasrid palaces are what everyone thinks of when the Alhambra is mentioned. The Alhambra’s most celebrated structures are the three original royal palaces built by the Nasrid rulers during the 14th Century when they moved out of the Alcazaba into more comfortable accommodation. They were built to impress and are some of the best Moorish architecture to survive anywhere. The exterior is quite plain, giving no indication of the riches inside.

Being the most sought after section of the Alhambra Palaces, tickets to the Nasrid Palaces are highly controlled (and obviously really hard to get). You will be given a specific slot to enter and a minute’s delay could spoil your visit. However, once you’re inside, you can spend as much time as you’d like.

To know more about planning your visit to the Nasrid Palaces, read on.

Nasrid Palaces Granada – History in Under a Minute

The Alhambra is an ancient palace, fortress and citadel located in Granada, Spain. The eighth-century-old site was named for the reddish walls and towers that surrounded the citadel: al-qal’a al-hamra in Arabic means red fort or castle.

In 1238, Mohammed I, the founder of the Nasrid Dynasty, settled into the Alcazaba fortress and began creating the palatine city known today.

The Alhambra wasn’t the construction project of a single ruler, but rather the work of a number of successive rulers of the Nasrid dynasty. Most of the well-known structures of the Alhambra complex known today were constructed by Yusuf I and Mohammed V including the Patio of the Lions, the Justice Gate, the Baths, the Comares Room, and the Hall of the Boat.

In 1492, King Ferdinand of Aragon and Queen Isabella of Castile conquered Granada, unifying Spain under a Catholic monarchy and ending centuries of Islamic rule. Charles V, who ruled Spain as Charles I, ordered the destruction of part of the complex to build a Renaissance-style palace for himself, called the Charles V Palace.

In 1812, some of the complex’s towers were blown up by the French during the Peninsular War. The Alhambra underwent a series of repairing and restoration efforts in the 19th century.

Today, the unique luxurious complex represents the excellence of Islamic art and culture in Spain. These palaces include within their walls, the delicacy of the last Hispanic-Arab governors of Al Andalus, the Nasrid. The heaven-like courtyards are inspired with elements of Persia and Arab. The crystal clear water that flows between the marbles of the fountains in the courtyards adds to its aesthetic beauty.

Highlights of the Nasrid Palaces

There are so many sights and wonders to see in the Narsid Palaces, these are the some of the highlights.

El Mexuar is an audience chamber near the Comares tower at the northern edge of the complex. It was built as a throne room for Ismail I, but later became a reception and meeting hall when the palaces were expanded in the 1330s.

The room has complex geometric tile dadoes (lower wall panels distinct from the area above) and carved stucco panels that give it a formality suitable for receiving dignitaries.

Behind El Mexuar stands the formal and elaborate Comares façade set back from a courtyard and fountain. The façade is built on a raised three-stepped platform that might have served as a kind of outdoor stage for the ruler. The carved stucco façade was once painted in brilliant colors, though only traces remain.

A dark winding passage beyond the Comares façade leads to a covered patio surrounding a large courtyard with a pool, now known as the Court of the Myrtles. This was the focal point of the Comares Palace.

The Alhambra’s largest tower, the Comares Tower, contains the Salón de Comares or Hall of the Ambassadors, a throne room built by Yusuf I (1333-1354). This room exhibits the most diverse decorative features contained in the Alhambra.

There are double arched windows which illuminate the room and provide breathtaking views. More light is provided by arched grille or lattice windows set high in the walls.

The walls are lavishly decorated with tiles laid in intricate geometric patterns. With the remaining surfaces covered with intricately carved stucco motifs organized in bands and panels of curvilinear patterns and calligraphy.

Palace of the Lions of the Alhambra

The Palacio de los Leones or Palace of the Lions stands next to the Comares Palace but is considered a separate building. The two structures were connected together after Granada fell to the Christians.

Muhammad V built the Palace of the Lions’ most ornate feature in the 14th century. The fountain in the courtyard has a complex hydraulic system consisting of a marble basin on the backs of twelve carved stone lions. They are positioned at the intersection of two water channels that form a cross in the rectangular courtyard.

An arched covered patio encircles the courtyard and displays fine stucco carvings held up by a series of slender columns. Two decorative pavilions protrude into the courtyard along the East and West at the narrow sides of the courtyard, which accentuating the royal spaces behind them.

To the West, the Sala de los Mocárabes or Muqarnas Chamber, may have functioned as an antechamber and was near the original entrance to the palace. It takes its name from the intricately carved stalactites or “muqarnas” that hold up the vaulted ceiling.

Hall of the Kings

Across the courtyard, to the East, is the Sala de los Reyes or Hall of the Kings, is an elongated space which is divided into sections with arches leading up to a vaulted muqarnas ceiling. The room also has multiple alcoves, some with an unobstructed view of the courtyard.

This room contains paintings on the ceiling which represent courtly life. The images were first painted on tanned sheepskins, in the tradition of miniature painting. They use brilliant colors and fine details and are attached to the ceiling rather than painted on it.

There are two other halls in the Palace of the Lions on the northern and southern ends; they are the Sala de las Dos Hermanas or the Hall of the Two Sisters and the Hall of Abencerrajas or Hall of the Ambassadors. Both were residential apartments with rooms on the second floor. Each also have a large domed room sumptuously decorated with carved and painted stucco in muqarnas forms with elaborate and varying star motifs.

The Partal Palace of the Alhambra

The Palacio del Partal or Partal Palace was also built in the early 14th century and is also known as del Pórtico or Portico Palace because of the portico formed by a five-arched arcade at one end of a large pool. It is one of the oldest palace structures in the Alhambra complex.

If you were wondering which tickets are the best ones to explore the Nasrid Palaces during your visit to the Alhambra? Check out these popular options that often sell out weeks in advance!

Getting to Nasrid Palaces Alhambra