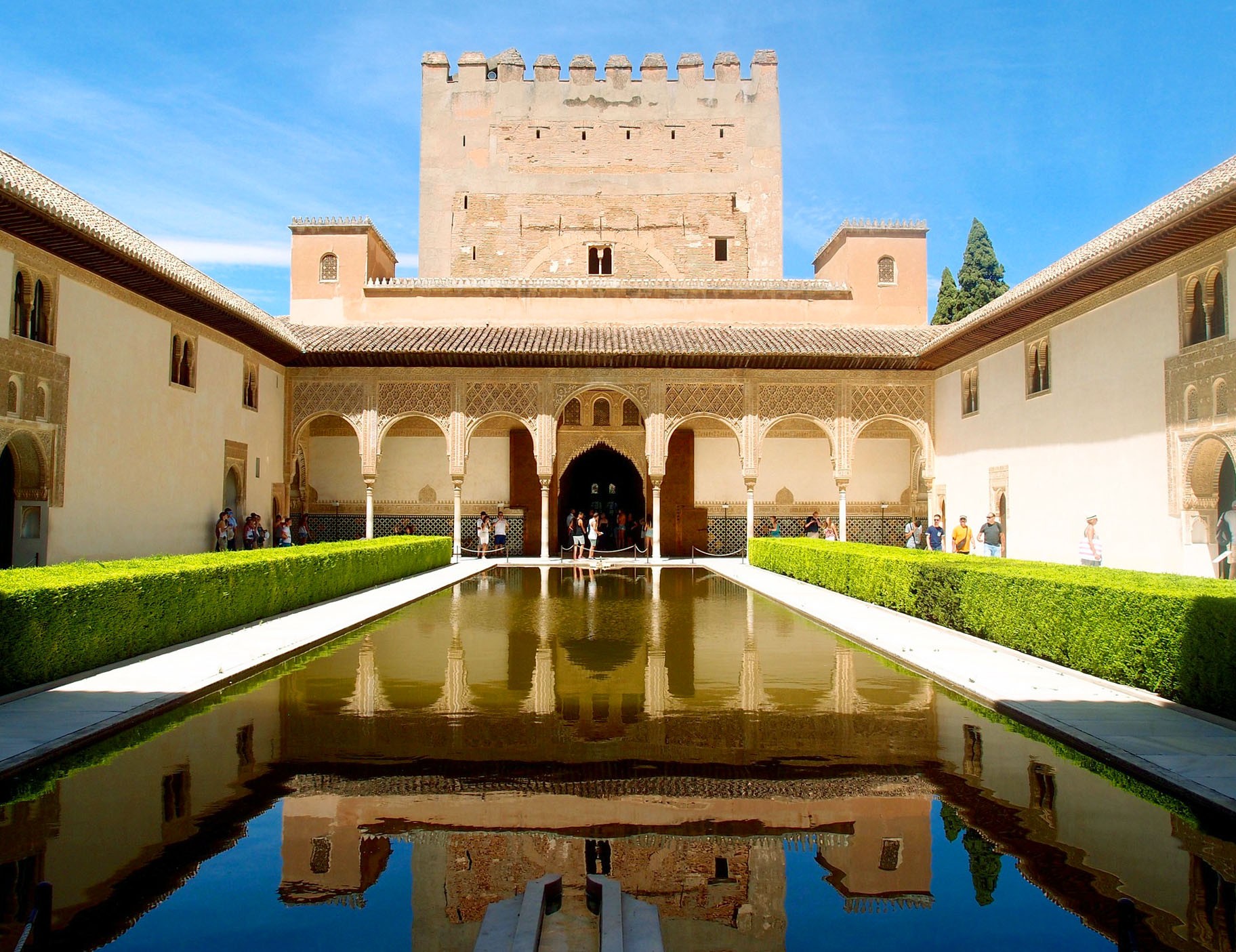 The Comares Palace was the official residence of the king and it comprises several rooms that surrounded the Patio de los Arrayanes. Its building was initiated by the Nasrid ruler of Granada, Ismail I (1314–25), and continued by Yusuf I (1333–54), though he was assassinated before he could complete the work. So Muhammad V finished it in 1370.

The Sultans wanted this palace to amaze the visitor, so he ordered the architects to build it and adorn it in a exquisite way. The Palace surrounds the Patio de los Arrayanes. The courtyard would be vitally important, it is the core of and building around which all the other rooms are distributed.

Facade of the Palace of Comares

Behind El Mexuar stands the formal and elaborate Comares façade set back from a courtyard and fountain. The façade is built on a raised three-stepped platform that might have served as a kind of outdoor stage for the ruler. The carved stucco façade was once painted in brilliant colors, though only traces remain.

A dark winding passage beyond the Comares façade leads to a covered patio surrounding a large courtyard with a pool, now known as the Court of the Myrtles.

Read more about the Facade of the Palace of Comares

Court of the Myrtles

The Patio de los Arrayanes or Court of the Myrtles is the central courtyard of the Palacio de Comares. The elegant and tranquil space takes its name from the myrtle hedges that surround the beautiful reflecting pool. Finely carved arches atop marble pillars form porticoes at both ends of the patio.

Situated at the northern and southern and ends of the pool are the fountains, and behind the fountains are the corridors, each with seven exquisitely embellished arches. As you can see, the middle arch is higher than the other six.

This southern façade have wooden panels decorated with fretwork or intricate carvings and Koranic inscriptions. Across the center are lattice windows with a classic, Moorish arch design. The chambers that originally occupied the second floor were truncated during the construction of the adjacent Palace of Charles V.

The north end of the Court of the Myrtles is similar to the south, although single story.  In the background is Comares Tower, built in the first half of the 14th century.

The Sala de la Barca or Hall of the Boat is entered via a pointed arch of mocarabes, in the northern gallery of the Court of the Myrtles.

The origin of its name is the Arabic word for blessing, and which seems to have degenerated into the Spanish word barca, which means boat. Although the shape of the ceiling does suggest the inverted hull of a boat, so that could be another reason for it. The original ceiling was destroyed by a fire in 1890 and it was replaced by a copy in 1964.

On the walls you will see plaster work with the Nasrid coat of arms and, inside it, the word “Blessing” and the dynasty’s motto “Only God is Victor”.

The ends of the hall were bedchambers, and the upper floors the Sultans winter quarters. The double arch in the northern wall leads to the Hall of the Ambassadors.

Hall of the Ambassadors

The Salón de Embajadores or Hall of the Ambassadors is the centerpiece of the Royal Palaces. The Hall is covered by a majestic dome of gilded wood. The ceiling, has a symbolic layout, emphasized the power of the Sultan, sitting on his throne and presiding over the room.

The lower part of the wall are tiles above which a rich plaster-work combines geometrical patterns with vegetal patterns decorated with leaf and flower motifs.

As you walk down the eastern side of the Court of the Myrtles try and get glimpses of the Moorish baths of the palace. Although not normally open to the public, unless it forms part of the ‘Space of the Month’, you can see parts of it as you walk around here and in the Palacio de los Leones. The baths are two story and from the Court of the Myrtles you would enter and descend to the steam rooms.  The whole steam area of the hammam is covered with vaults perforated with a multitude of star shaped skylights, which were used for lighting and vents.

Read more about the El Baño de Comares
1. Facade of the Palace of Comares2. Court of the Myrtles 3. Sala de la Barca4. Hall of the Ambassadors5. Comres Baths