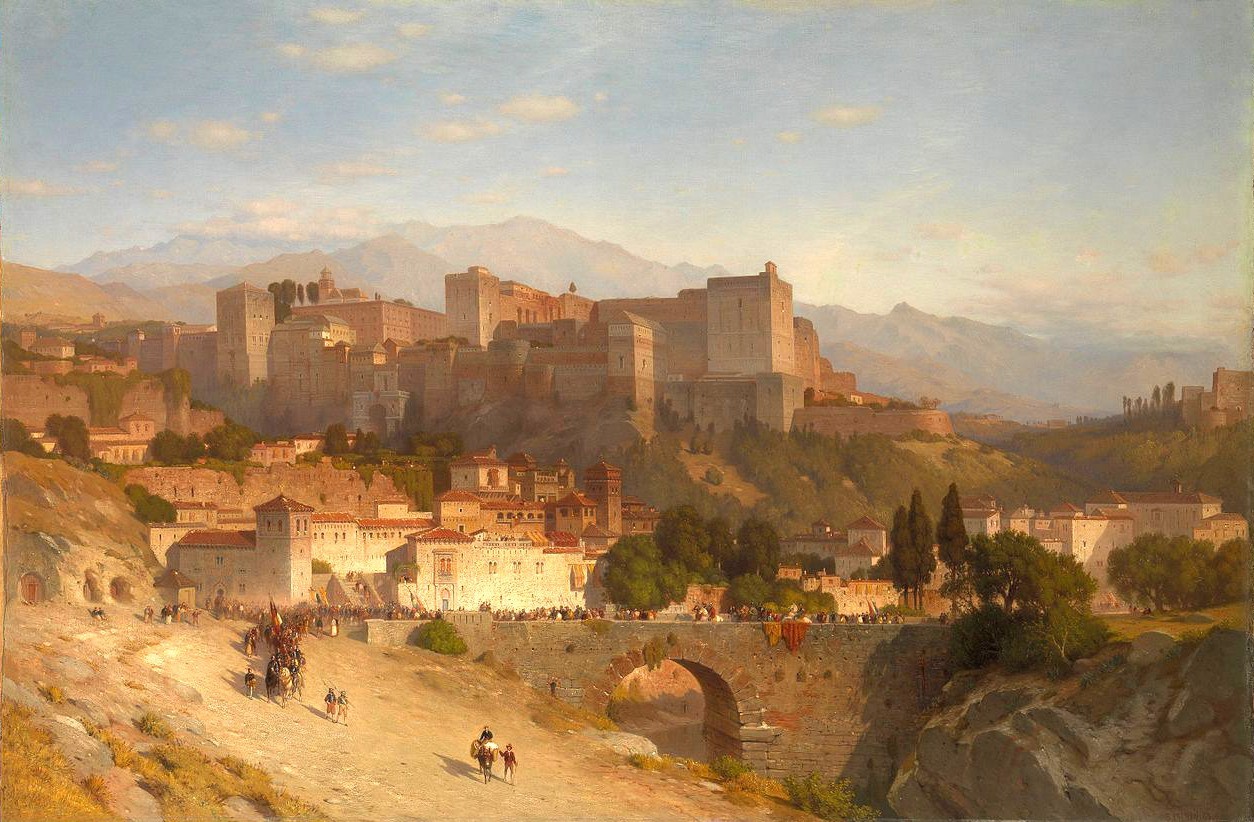 The Alhambra is one of the most popular tourist sites in Spain. It is an ancient palace and fortress situated on the outskirts of the town of Granada in Andalusia. It was constructed by the Moors who invaded the country in the 8th century, and is a fine example of the hybrid style known as mudéjar art and a powerful symbol of Spain’s multicultural past.

The Alhambra was so called because of its reddish walls, in Arabic it was called “qa’lat al-Hamra” which means Red Castle. It is located on top of the hill al-Sabika, on the left bank of the river Darro, to the west of the city of Granada and in front of the neighborhoods of the Albaicin and of the Alcazaba.

Early History of the Alhambra

The first signs of construction date back to at least the Roman times and can be attributed to the site’s advantageous position with good visibility of the surrounding area. Overlooking the valley of the river Darro on its northern side and the  valley of al-Sabika on its southern side.

In 711 Arab and Berber forces crossed the Strait of Gibraltar and within seven years rapidly established a measure of Muslim control and effectively conquered the Iberian peninsula.

The first historical documents known about the Alhambra date from the 9th century and they refer to Sawwar ben Hamdun who, in the year 889, had to seek refuge in the Alcazaba, a fortress, and had to repair it due to the civil fights that were destroying the Caliphate of Cordoba, to which Granada then belonged.

This site subsequently started to be extended and populated, and a Jewish grand vizier built a place on the hill of the Albaicin for his  Zirid sultan.

It was in 1237 that the first king of the Nasrid dynasty the Moorish emir Mohammed ben Al-Hamar (Mohammed I, 1238-1273) secured this region. He established the royal residence, the Alhambra, on Sabika hill the following year.

Mohammed first concern was to strengthen the defenses of Alcazaba protected by three great towers known and the Watch Tower, The Homage Tower and the Quebrada Tower.

Water was fed from the river Darro by canal, warehouses were built and the palace and the ramparts were started. These two elements were carried on by Mohammed II (1273-1302) and Mohammed III (1302-1309), who also built public baths and the Mezquita, on the site of which the current Church of Saint Mary was later built.

It was started to be turned into a royal palace by Yusuf I (1318 – 1354), and finished by his son Muhammed V (1338 – 1391). They made improvements to the Alcazaba and the palaces, to the Patio de los Leones and its annexed rooms, including the extension of the area within the ramparts, the Justice Gate (Puerta de la Justicia), the extension and decoration of the towers, the building of the Baths (Baños), the Comares Room (Cuarto de Comares) and the Hall of the Boat (Sala de la Barca).

The palace was designed in the typical fashion popular among Muslim rulers on the peninsula at the time, featuring the presence of horseshoe arches, arabesques and calligraphy.

From the time of the Catholic Monarchs until today we must underline that Charles V ordered the demolition of a part of the complex in order to build the palace which bears his name. We must also remember the construction of the Emperor’s Chambers (habitaciones del Emperador) and the Queen’s Dressing Room (Peinador de la Reina) and that from the 18th century the Alhambra was abandoned.

Charles V, who ruled in Spain as Charles I (1516–56), ordered the construction of the Emperor’s Chambers (habitaciones del Emperador) and the Queen’s Dressing Room (Peinador de la Reina ). He also destroyed part of the Alhambra in order to build an Italianate palace designed by Pedro Machuca in 1526.

During the years 1700’s and 1800’s the Alhambra was occupied by beggars and the homeless. In 1812 during the Peninsular War, Alhambra was used as a barracks. Some of the eastern towers were blown up by a French force under Horace-François-Bastien Sébastiani, during their retreat. The rest of the buildings narrowly escaped the same fate.

In 1821 an earthquake caused further damage to the complex. An extensive repair and rebuilding program was undertaken in 1828 by the architect José Contreras and endowed by Ferdinand VII in 1830. After the death of Contreras in 1847, his son Rafael continued his work for nearly four decades.

The Alhambra was declared a national monument in 1870. Upon Rafael’s death in 1890, he was succeeded by his son, Mariano Contreras Granja (died 1912). Additional restoration and conservation work continued through the 21st century.