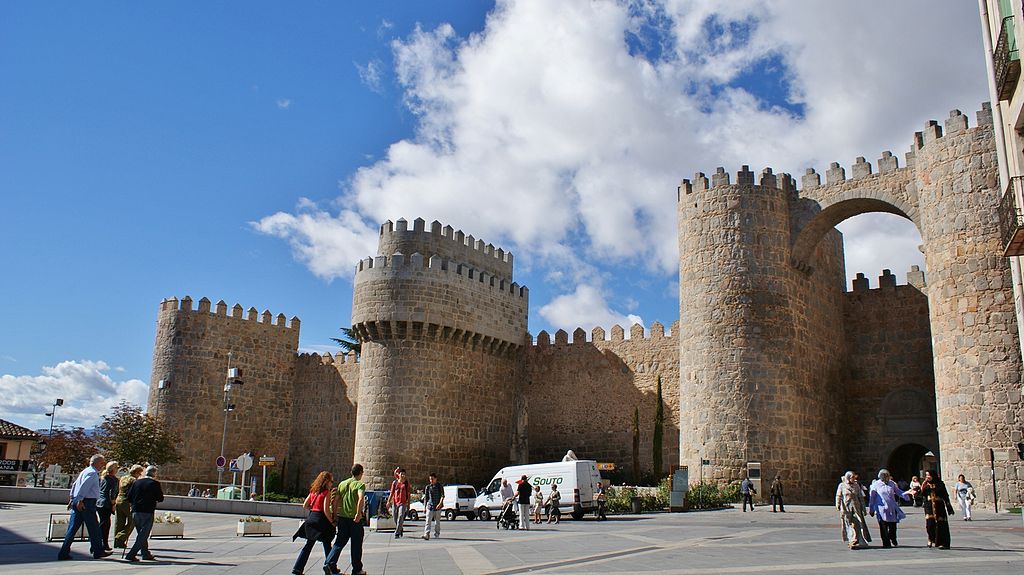 Ávila will always be associated with the image of its city walls. Visible from far away, they are among the best-preserved and most complete in Europe. Inside the perfectly walls, visitors can find many historic attractions: Romanesque churches, medieval convents, and Renaissance palaces.

If you are driving then you should park at The Avila Exhibition Hall. Large parking area with an inexpensive motorhome area close to the old city.

One of the gates of the City Walls. The Puerta del Carmen (Gate of El Carmen) is interesting as it has a skewed entrance. This means that to gain access from the outside, a turn is necessary, which prevents it from being approached head-on. This formula was very common in Moslem military architecture and guaranteed a better defence system by impeding a head-on attack. It also differs from other entrances because the turrets around it have a square layout.

This is one of the access points to the city Walls.

This building dates from the beginning of the 16th century and is made of granite ashlar work and masonry. The porch is decorated in Plateresque style with military motifs and the courtyard lintels are decorated with medallions.

The Palace is set around a quadrangular central courtyard surrounded by galleries and each front has five columns, with monolithic shafts, Doric capitals and bases. The first-floor gallery is made up of shorter columns which also support sculpted lintels and coats of arms. The tributes room is of particular interest, with an important coffered ceiling made of wooden coffers and beams set on carved corbels.

Today it is used as the Military History Archive and Army Museum.

Read more about the Palace of Polentinos (Ávila)

The Plaza del Mercado Chico occupies the former space of a Roman forum, with the 19th-century Ayuntamiento (town hall) facing across the expanse to the Iglesia de San Juan Bautista.

This church is of Romanesque origin and was completely refurbished in Gothic style with unquestionable Renaissance influences at the beginning of the 16th century.

Read more about the Church of San Juan Bautista (Ávila)

The palace was built between the 13th century and the 16th. For this reason, a juxtaposition of styles can be noticed in its design. The oldest part seems to be the gate of the Rastro, or street market. The palace is attached to the fortified wall.

Carry on down Pl. Rastro and turn the next right onto C. los Cepedas. in the next Plaza – Corral de las Campanas you will see Torreon de los Guzmanes a the Palace of Superunda.

Torreon de los Guzmanes: Dating from the beginning of the 16th century, the construction of this palace was ordered by the Mújica lineage. It has an imposing quadrangular corner tower in Renaissance style, built in masonry and ashlar work and finished off with merlons and machicolations. The palace also boasts overhanging lookout posts with loopholes on the corners, which shows its defence purpose.

Palace of Superunda: Palace built at the beginning of the 16th century with italian influence. It was the house of Ochoa de Aguirre. The name comes from the count of Superunda and marquis of Bermudo, Don José Manso de Velasco y Chaves, who inherited it at the end of the 19th century.

Crowned with two short towers. The stone staircase was done by two stonemasons from Cardeñosa: Simón Martín and Pedro Pescador, substituted by Juan Vela in 1593.

The convent, inaugurated in 1636, was built on the site of the birthplace of Saint Teresa of Avila and designed by the architect Fray Alonso de San José. It is worth a visit especially as it is free to enter! Highlights include the church’s Baroque façade, and the interior with a Latin cross floor plan, whose side naves contain magnificent sculptures by the master Gregorio Fernández.

The Museum of Saint Teresa stands next to it.

One of the gates to the south side of the City.

From the Puerta de Santa Teresa urn left and walk along the walls. As the wall turns to the left in front of you is the Convent Of The Magdalena.

The Convent of Recollect nuns of San Francisco was founded in 1624 by the IV Duke of Arcos Rodrigo Ponce de León, and his wife Ana de Aragón y Sandoval, Viceroys of Naples. At first it was established in the hermitage of San Lorenzo, until October 25, 1631, the day on which they moved to some houses belonging to the Ducal Palace, perhaps taking advantage of construction elements of the citadel or the palace itself. Its organization around small patios and its proximity and relationship with the church of Santa María give rise to these hypotheses.

Continue along will come to the Puerta del Alcázar.

The Puerta del Alcázar is on of the most impressive entrances to the City.

The Romanesque Catedral was begun in the 12th century as a part of the city’s walls that were being built during the same period. Its apse, known to parishioners as the cimorro, is part and parcel of the defensive structure of the walls. The main façade is relatively modest in styling, save for the large Gothic window and the tower rising over it. The interior, on the other hand, is more elaborate than a fortress structure might suggest; it conforms to the traditional shape of a Latin cross, lit by the sunlight cast through stained glass, with a fancily painted high altarpiece, carved choir stalls and nine chapels.

Where better to start exploring Ávila than a bids eye view from its walls. You need to access the wall via the Tourist Office in the Casa CarniceríasCasa Carnicerías.

The main landmark in the city is the imposing Walls of Ávila (11th–14th centuries), begun in 1090.The walls were likely constructed around the turn of the 12th century while the
self-proclaimed “Emperor of all Spain,” King Alfonso VI, was busily reconsolidating the Castilian regions from the Moors. The walls, actually one continuous expanse, wrap around the city for a length of 2½ km (1½ miles), with a total of nine gates, 88 watchtowers and well over 2,000 turrets.

The walls represent the largest fully illuminated monument in the world. It is possible to walk upon the walls for roughly half their circumference. While some of the walls will never be walkable because of their integration into other structures, a large stretch has yet to be made safe for pedestrians.

You can either leave the wall at Puerta del Carmen or continue on to the Muralla De Avila on the western wall. 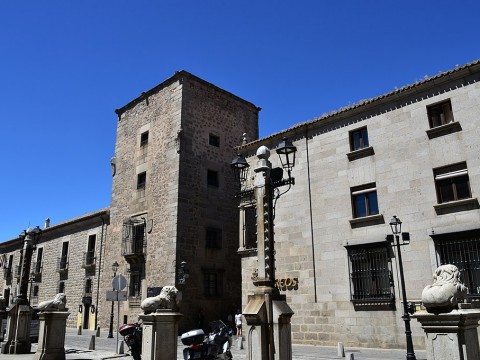 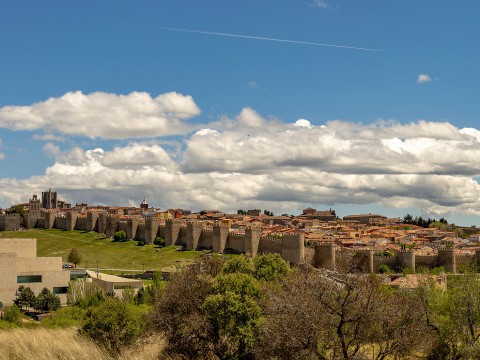 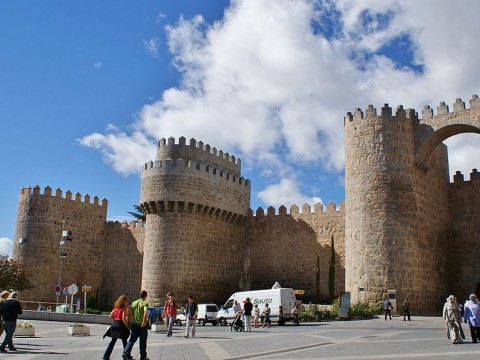