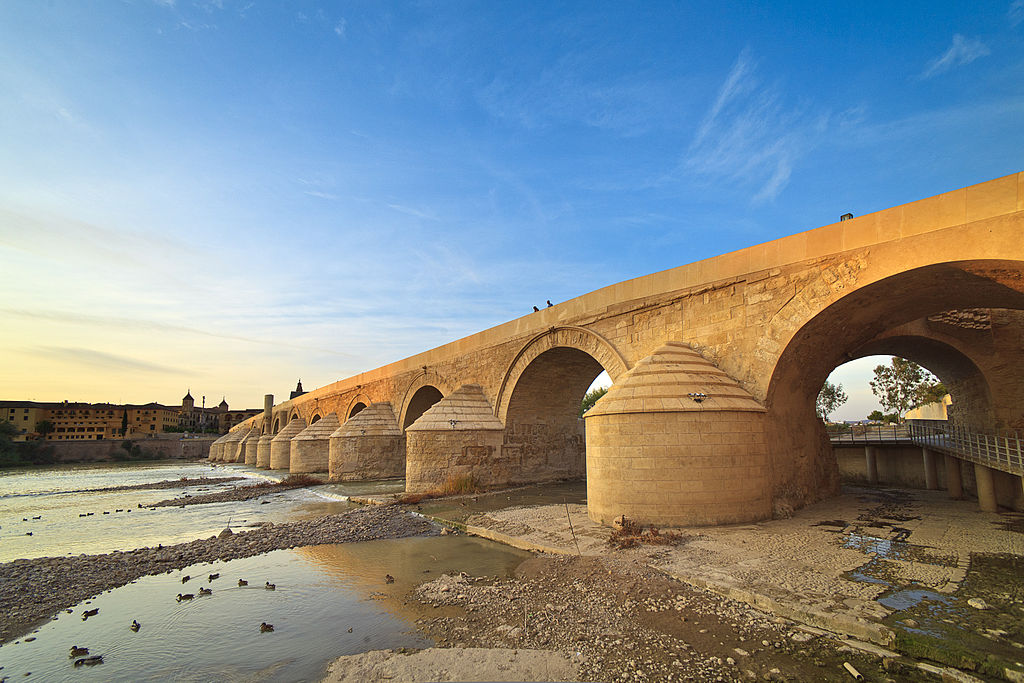 The city suffered a minor setback during the civil wars between Caesar and Pompey’s sons as Corduba backed the loosing side. However Augustus Caesar soon assigned lands to great number of his best veterans troops who had taken part in the northern wars and gave the city back its status, under the name Colonia Patricia or Patrician Colony.

Cordoba then thrived under Roman rule, and a great number of monumental buildings as well as public works were built; including a walled perimeter was extended up to the River Betis currently or the Guadalquivir. The city must have seen great commercial and cultural activity too, as evidenced by the two forums, one colonial and one provincial, which existed here. Great public buildings were raised, like the recently discovered amphitheatre, as well as huge temples, like the one situated in Calle Claudio Marcelo, and the streets were lined with elegant sculptures.

See below for places where you’ll find vestiges of Roman influence in this southern Spanish city.

The Templo Romano or Roman Temple  was discovered in the 1950’s when the City Hall was being expanded.  The Temple was built during the reign of Emperor Claudius (41-54 AD) and ended some forty years later, during the reign of Emperor Domitian (81-96 CE). It is thought that the temple was  dedicated to the cult of the Emperor, and along with the Circus Maximus, would have formed part of the Provincial Forum.

The sheer size of the building is remarkable, you can see a series of towering marble columns which originally stood on a raised podium and had six free-standing Corinthian columns in the entrance, in front of which was the altar.  You can find the remains of the temple at the Calle Capitulares.

The Puente Romano or Roman Bridge was originally built in the first century BC across the River Betis  or Guadalquivir river. This arched bridge spanning the Guadalquivir River was once part of the Via Augusta, a major Roman thoroughfare on the Iberian Peninsula. The bridge was built by the emperor Augustus and has often been repaired.  The great river is navigable up to this point. From here, olive oil and ores were transported to the Atlantic Ocean and to the Mediterranean Sea. This monument was part of a larger plan to develop southern Spain; another aspect was that many veterans from the Sixth and Tenth legions were settled in this area.

Most of the current bridge dates from the Moorish reconstruction that took place in the 8th century. On one side of the bridge, you can find the Moorish Torre de la Calahorra – which houses a museum and should be visited for the views if nothing else. On the other side of the bridge, there is the Puente Romano, a Renaissance gate.

The bridge came to public’s attention when it was used as the Long Bridge of Volantis in the television series Game of Thrones.

The Museo Arqueológico de Córdoba or the Córdoba Archaeological Museum chronicles the history of Córdoba, from prehistoric times to the Reconquista and beyond. The Roman era is well-represented, with the remains of the city’s ancient Roman theater on show and items from the Roman Temple on display.

The Mezquita-Catedral de Córdoba or the Mosque–Cathedral of Córdoba is is one of the Islamic architectural highlights of the Spain. Although it was built long after the Romans had departed, materials from Roman buildings were used in its construction. Two milestones that once could be seen along the Via Augusta are now positioned at the entrance of the mosque/cathedral.

Bishop Ossius was the author of the Creed that was agreed upon during the Council of Nicaea in 325. Traces of his church, the Saint Victor, have been discovered beneath the mosque.

The Roman mausoleum of Córdoba is an ancient structure in the Jardines de la Victoria, Córdoba, Andalusia, southern Spain. It is a funerary monument of cylinder-shaped that corresponded to a group of funerary monuments of the Republican era, built in the 1st century AD. It was discovered in 1993 during archaeological excavations.

Read more about the Roman Mausoleum

Located in the archaeological zone of Cercadilla , this palace dates from the time of the Roman emperor Maximiano Hercúleo during his stay in Spain between the years 296 and 297 AD. This was at the time of the first Tetrarchy, as a consequence of the dispersion of the centers of power of the Roman empire, on the one hand, and due to the incursions of frank piracy in the area of ​​the Strait of Gibraltar, on the other.

This building erected on a suburban villa from the high-imperial Roman period. in the time of the Visigoth it became the basilica of the Martyr San Acisclo.