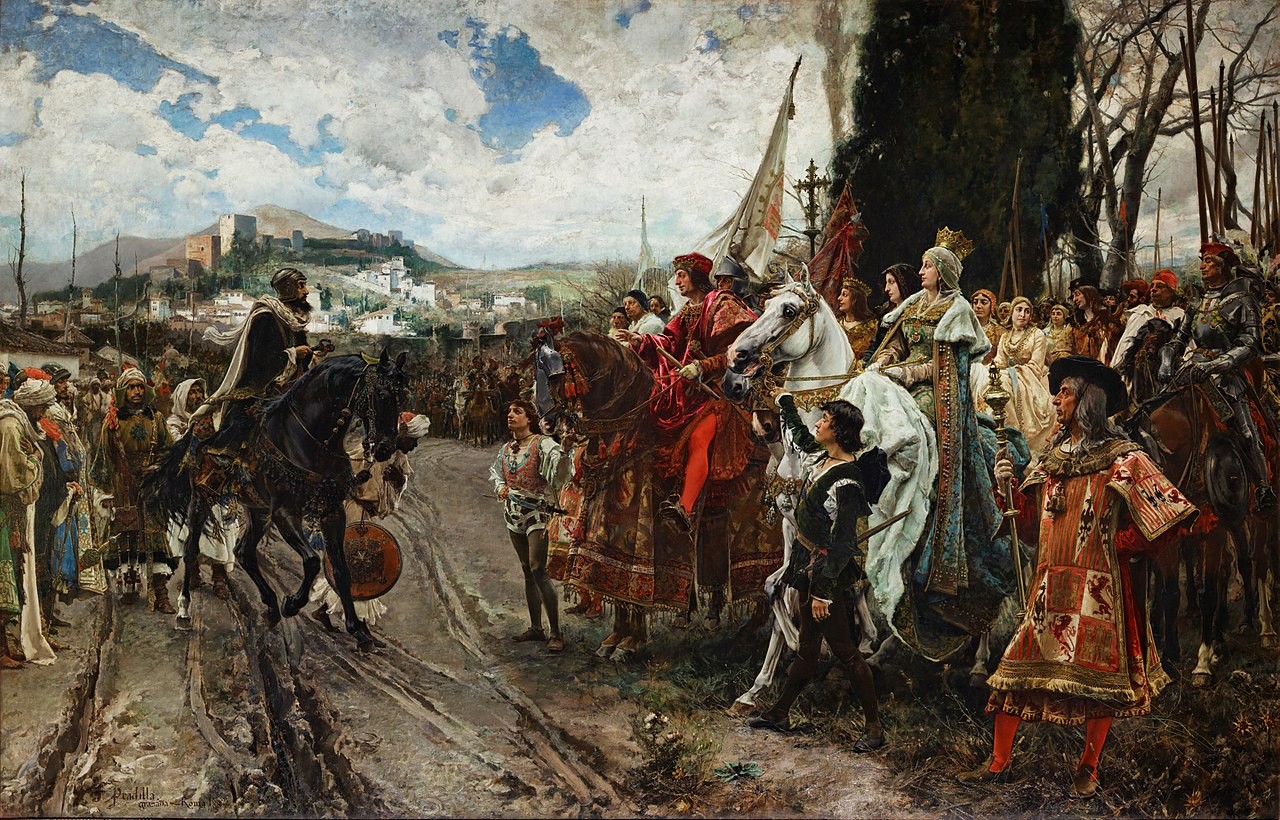 Abu Abdullah was the twenty-second and last Nasrid ruler of Granada in Iberia. Boabdil is a Spanish rendering of the name Abu Abdullah. Boabdil was born in the Alhambra Palace his father was Abul Hassan Ali, who was also known as Muley Hacén and his mother the Sultana Aixa.

From the start, a shadow lay over him, as court astrologers predicted that he would suffer great misfortune, to the extent that he became known by the nickname El Zogoibi or the Unlucky One.

Later his nickname would begome “el rey chico” or “the small king” which did not have anything to do with his stature but referred to the size of his ever-diminishing kingdom!

If you’ve seen paintings like “La rendición de Granada” by Francisco Pradilla; or a series like “Isabel” or “Réquiem por Granada” you’ll already have an image of what this king looked like: brown skin, jet black hair… but it seems that Boabdil was blond, tall, and pale.

Alhambra – a Palace of Treachery

When he was born the Alhambra was under the rule of his Grandfather the Sultan Abu Nasr Sad, and was a Palace of violence and treachery. In 1461 the his grandfather wanted to rid himself of the powerful Abencerrajes family, who had always been his supporters and promoters. The terrible story goes that he invited them all to a banquet at the Alhambra and had nearly the entire clan slaughtered there, including his own minister Mufarrij. Only a few escaped and fled to Malaga.

He gave his name to the highest mountain peak on the Iberian Peninsula, Mulhacén, where it is said he was buried.

Amidst this treachery and treason Boabdil’s early education would have begun at the age of five, sometimes at the mosque of the Alhambra but also with private tutors in the Madrasa de los Príncipes. He would have studied the Koran thoroughly, and learned not only arithmetic, Arabic grammar, poetry, logic, algebra, science, history, law and theology, but also how to ride, and to use a lance and sword.

His father was supposed to be a cruel and aggressive character and started his reign by trying to eradicate the surviving members of the Abencerrajes family. The Abencerrajes in turn through their support behind the king’s brother, Abu Abdallah Muhammad, known as El Zagal – the Valiant, and proclaimed him as their Sultan.

His father turned his attentions on constant attacks on the Christians. These raiding parties forced the enemy to sign a series of truces, leading to a relatively long period of peace from 1465 until about 1481. The peace was helped by the War of the Castilian Succession (1475 – 1479) between Isabella, who was married to Ferdinand, heir to the Crown of Aragon, and Portugal. By 1479 there was peace with Portugal and Castilian and Aragon united under the Catholic Monarchs.

At the same time the Sultan seemed to undergo a breakdown, devoting his time to pleasure and dancing girls, growing more confused and began to decline. This may have been brought on by a series of portends from the Kings Astrologers, from the appearance of a comet, horrific flooding of the River Daro, and predictions of an ancient weathercock.

Boabdil’s mother was a powerful Nasrid princess, said to have been descended in a direct line from the Prophet Muhammad. She was the daughter of Muhammad IX (1396–1454), and the widow of Muhammad X (1415–1454), who was the eighteenth Nasrid Sultan who had been executed by Abul-Hasan on behalf of his father, Sa’d.

For the first twenty years of marriage war peaceful and Boabdil had a younger brother and sister.

The sultan had organised an attack on the small Christian town of Aguilar in 1471, and the raiding party captured Isabel de Solís, the daughter of the knight commander of the town. The young girl was very beautiful and of good appearance and they called her Zoraya, which means ‘lamp’ in Hebrew. At first she was a slave but caught the eye of the king. Abul-Hasan, fell in love and married Zoraya. He gave her land, houses and a privileged position at court. He lived with her in the Comares tower.

Aixa on the other hand had been banished to the rooms surrounding the Patio of the Lions with her children and loyal servants and advisers and the king never spoke to her or saw her.

When Zoraya gave birth to two sons, the Royal Princes Sa’d and Nasr there was a threat posed to Boabdil, and the position for Aixa became intolerable.

A Desperate Escape to Guadix

In 1482 it is thought that two Abencerrajes knights had heard of a threat to the life of Boabdil and his brother Yusef. They conceived a dramatic plot to remove the reigning sultan and replace him with Boabdil. They arranged a time for men to wait with horses next to an irrigation channel on the outskirts of the Generalife gardens. The two princes, using rope, climbed down the side of the tower that they were imprisoned in. They made their way to Guadix, where Boabdil was declared Sultan and they gathered their troops and waited for an opportunity to strike.

After an escalation of raids the Christians lead a successful surprise attack on Alhama and then an unsuccessful one on Loja. Abul-Hasan took his troops and defended Loja. While Abul-Hasan was celebrating the victory at Loja, the news reached him that, with the help of the Abencerrajes, his son had arrived in Granada, and occupied the Alhambra. Boabdil’s father retreated, for the next year he governed Malaga and Ronda which Boabdil controlled Granada and Almeria.

In 1483 Abul-Hasan enjoyed a great victory against the Christians, who had tried to capture Ajarquía, in Malaga. He also retaliated by seeking a proclamation from the clerics that Boabdil’s claim to the throne was not legitimate. The clerics agreed that Boabdil had broken his oath of fealty and had been consorting with Christians.

Not to be outdone and to gain more prestige, Boabdil endeavored to invade the region of Castile, unfortunately things did not go as planned and he was captured and imprisoned in the castle at Lucena for three years.

Boabdil’s father took back Granada in 1483 and Yusef retreated to Almeria. However his father began to suffer bouts of illness, to the extent that in September 1484 he was unable to take part in a battle due to a form of epilepsy which gave him seizures and bouts of blindness.

Seizing the advantage Boabdil’s brother El Zagal declares himself Sultan and the country erupts into Civil War. El Zagal is victorious and sends his brother like his father before him to Salobreña castle, where he soon died.

The Fall of Granada

In 1487, three years after his capture, in exchange for his freedom, Boabdil agreed to govern Granada under the Catholic kings, to released 400 Christian slaves and to pay them 12,000 gold doubloons.

The next six years saw more frequent civil wars and internecine strife, greatly favoring the ever-stronger Christian forces who took the Moorish cities one by one and eventually laid siege to Granada. The city fell on 2 January 1492 and, four days later, after total capitulation by its inhabitants, the reconquista came to an end.

From this magnificent center of culture, of science and learning, of glorious art and architecture, Boabdil was expelled and the armies of Fernando and Isabel, the Reyes Católicos, or Catholic Kings, raised the Christian cross on the Alcazaba alongside their royal standards of Castile and Aragón.

Boabdil was granted a fiefdom in the region of Las Alpujarras and left Granada by the southern route to La Zubia. About 12 kilometres from the city he paused at a mountain pass and looked back at Alhambra and sighed for what he had lost. His mother travelling with him is said to have been somewhat unsympathetic, telling him: “You do well to weep like a woman for what you could not defend like a man.”

They moved to Andarax and there they remained until the Castilians, recanting once again on their agreements, decided to expel them from Spain.

Thus, in October, boabdil, his mother Fátima, his sister, his son Ahmed and Yusef together with a small retinue, left from the harbour at Adra towards Africa. Morayma “the only woman Boabdil was Known to have loved”, says one chronicler, “the only being who could have made the suffering of his exile bearable”, died a few days before leaving the Alpujarras.

Boadbil lived in exile for less than a year in the Alpujarras before travelling to Fez in Morocco where he died fighting other battles in 1527.