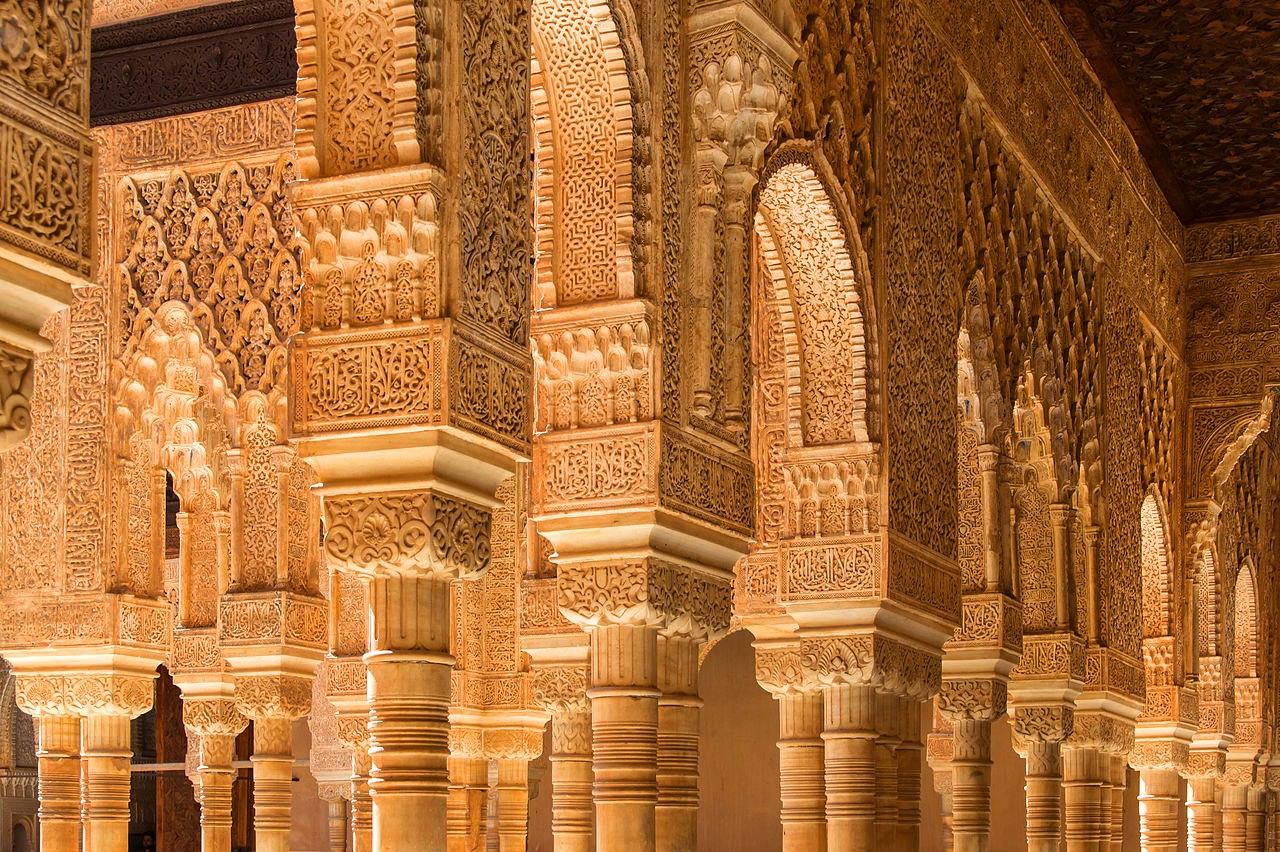 The Land of Al-Andalus

In the Middle ages al-Andalus referred to that part of the Iberian Peninsula that was under Muslim control, which was most of it. The Arabic word al-Andalus translated to Spanish means Andalucia.

Since the gradual retreat of the Roman empire in 409 Spain had been ruled by the Visigoths, a German gothic tribe who had invaded France, Italy, and Spain. It was ruled by a king in its capital was Toledo, and was split into five provinces ruled by Dukes. In 711 King Roderic was fighting a rebellion in the north by the Basques.

Who were the Moors? The word Moors derives from the Latin mauri, a name for the Berber tribes from the ancient Roman province Mauretania in modern day Algeria and Morocco.  It has no ethnographic meaning but can be used to refer to all Muslims, Berber or Arab, who conquered the Iberian Peninsula. Beginning in the Renaissance, “Moor” and “blackamoor” were also used to describe any person with dark skin.

In May 711, Tariq, governor of Tangier, led a force of seven thousand Berbers across the straits and routed the Visigothic army of King Roderic; two years later, the Visigoths made a last desperate stand at Mérida, and within a decade the Moors had conquered all but the wild mountains of Asturias.

In May 711, Tariq ibn Ziyad led an army of around 7,000 Syrians, Yemenis, and Berbers north from Morocco. The Islamic invasion of Spain had begun with Tariq landing his forces at Gibraltar. He defeated king Roderic and the Battle of Guadalete in July 711.

When the Muslims first stepped foot in Spain, they came across a rock and called it Jab al Tariq in honor of their leader Tariq Ibn Ziyad. This rock is called Gibraltar today.

In 712, Musa ibn Nusayr – who was fresh from conquering the Maghreb for the Umayyads in Damascus – crossed from Morocco with another 18,000 men, and soon they had taken two thirds of Spain.

By 720 the Iberian Peninsula was under Islamic control. Although they still reported to the Caliph of Damascus in Syria. It became a part of the caliph of Damascus which was the capital of the Muslim world.

The first 40 years of Moorish rule was volatile. Relations between Arabs and Berbers in al-Andalus had been tense in the years after the conquest. Berbers heavily outnumbered the Arabs in the province, had done the bulk of the fighting, and were assigned the harsher duties and as a consequence mutinies by Berber soldiers were frequent.

In 740, there was a successful Berber Revolt in the Maghreb, in North Africa, and Berbers of al-Andalus quickly raised their own revolt. The Arab forces of al-Andalus managed to put the revolt down with the assistance of a Syrian army, only for the two victorious armies to fall on each other.

The Rise of the Umayyad Dynasty – 755

Al-Andalus needed order and unity which came in the form of Abd-er-Rahman I who arrived in Almuñecar on the coast of Granada in 755. Within a year he became Emir of Al-Andalus and during his 32 year reign he would transform this land into an independent state which was the cultural light of Europe. He created an organized and prosperous state that reported to no one for 200 years.

At this time most of the Muslim world was goverened by an Arab dynasty of Caliphs known as the Umayyads, who claimed to rule as successors of the Prophet Muhammad.

In Cordoba Abd-er-Rahman I founded the Mezquita in 785 when he purchased the Christian section of the San Vicente Church, a place the two faiths had shared for 50 years. The Mosque was expanded to its final glory over the next two centuries. This became the second most important place of worship in the Muslim world after Mecca.

Between 929- 1013 the Umayyad dynasty continued and was led by Abd-al Rahman III. He considered himself the caliph and prince of believers. Thereby establishing a caliphate. Cordoba was the highlight during his reign with Granada in the background, submissive to the caliphate.

Al-Mansur led the armies of al-Andalus against the Christians over a period of 20 years and in 997 his army captured Santiago de Compostela. They destroyed the shrine and prisoners took the basilica doors and bells to Cordoba where they would be placed in the Mezquita. He dies in 1002 and his children could not hold onto the kingdom. The Umayyad dynasty and the Cordoban Caliphate collapsed.

Seville and Granada were the most powerful of these small kingdoms followed by Cordoba, Almeria, Zaragoza, Badajoz and Toledo.

The Zirids were the ruling dynasty of the Taifa of Granada at this time. They also ruled large areas of Algeria.

The Taifa Kingdoms were suffering from attacks from the Christian Kingdoms. In 1086 the Taifa leaders in southern Iberia asked the Berber Almoravids to aid in repelling the Christian armies of Northern Spain. Although they were victorious over Alfonso VI, king of Leon and Castile the Almoravids, decided not to leave and assumed control over Muslim Spain.

The tolerant society of the caliphate and the taifas disappeared as the Almoravids persecuted Christians and Jews.

In 1125 the Almohads, were natural enemies of the Almoravid desert tribe, began a rebellion in the Atlas Mountains and after 22 years of fighting emerged victorious. The Almohades were less tolerant than the Almoravids and ordered the destruction of all churches and synagogues forcing Christians and Jews to swarm to the north.

In spite of this fanaticism, a period of great cultural achievement occurred under the Almohades which was the brightest period between the caliphate and the glories of Granada centuries later.

The minaret of the Seville mosque, La Giralda, was built during this period with wide ramps all the way up the tower which allowed the sultan to ride his horse to the top.

In 1212 a united army of Spanish and European soldiers utterly destroyed the Almohad army at Navas de Tolosa, an event which marked the beginning of the end for Moorish Spain.

The Balearics fell to King James I of Aragon in 1235. In 1236 Fernando III – The Saint captured Cordoba and reconsecrated the mosque as the cathedral of Cordoba. He then made captured Muslims carry the bells, stolen by Al-Mansur two centuries earlier, back to the cathedral in Santiago.

It was a brief golden age of Al- Andalus. Muhammad Al Ahmar knew that Islamic Spain was coming to an end. He wanted to make an ever lasting final impression. As a result, the Alhambra was created. Muhammad Al Ahmar started with its construction and his successors finished it.

This was the great age of Muslim Spain: its scholarship, philosophy, architecture and craftsmanship were without rival and there was an unparalleled growth in urban life, in trade and in agriculture, aided by magnificent irrigation projects. These and other engineering feats were not, on the whole, instigated by the Moors, who instead took basic Roman models and adapted them to a new level of sophistication.

In architecture and the decorative arts, however, their contribution was original and unique – as may be seen in the fabulous monuments of Seville, Córdoba and Granada.

The Fall of Granada

In 1479 the merger of the kingdoms of Castile and Aragon under Los Reyes Católicos (Fernando and Isabella) would soon lead to the fall of the kingdom of Granada and the end of Moorish rule in Spain.

The kingdom of Granada included modern day Granada, Almeria and Malaga.  Its rulers, the Nasrid dynasty, had retired to a pleasure seeking existence within the confines of the Alhambra palace.  Jealousies stemming from the harem were the source of instability of Moorish Spain and would ultimately be influential in the fall of Granada.

Within the harem various sons could be born to different mothers each with equal rights to the throne.  Granada was split between the supporters of Mulay’s wife, Aixa, and her son Boabdil on one side and a beautiful Christian prisoner called Soraya on the other.  Civil war ensued when the sultan chose Soraya over Aixa and her son.  Los Reyes Católicos couldn’t believe their luck as Granada slowly self-destructed.  Aixa’s followers gained the upper hand and Mulay fled to the protection of his brother who was governor of Malaga.

Rather than attack, Fernando chose to blockade Granada.  After months of stalemate and negotiations Boabdil surrendered, in return for 30,000 gold coins, part of the Alpujarras mountains to the south of Granada and political and religious freedom for his subjects.

On January 2nd 1492 Los Reyes Católicos marched into Granada and the last stronghold of Moorish Spain came to an end.