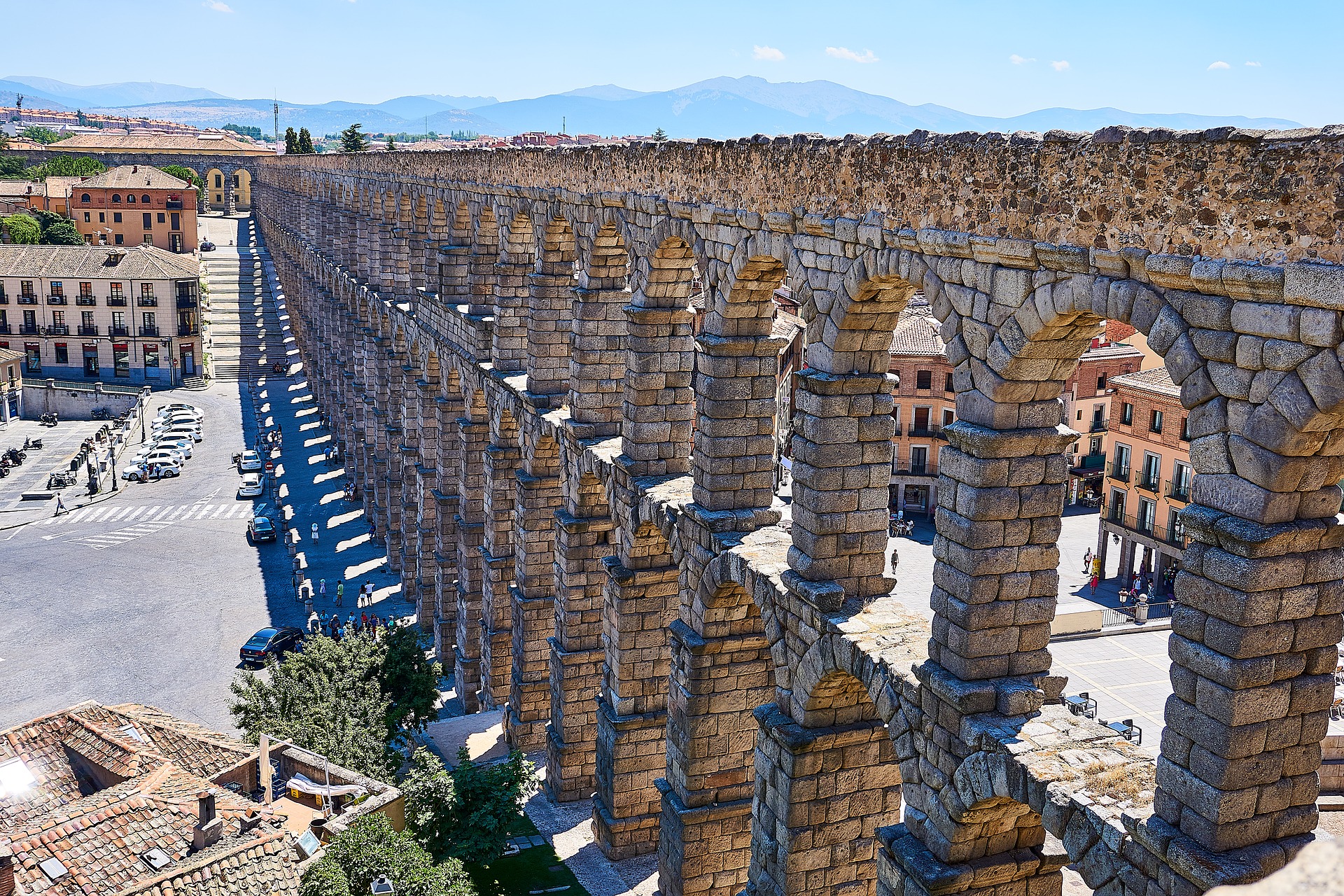 Our first stop is in the Plaza del Azoguejo square, with its amazing views of the Aqueduct. The nearby information point is a good opportunity to pick up all the information you need for a tour of the city.

As well as having your photo taken under the aqueduct, you can also see interesting details, especially the perfection of the masonry, with no mortar or other adhesive material to keep the blocks together. Each one (weighing up to two tons) is simply placed on top of another, demonstrating the precision of Roman engineering. If you look closely, you’ll see that apart from some of the lower ones, the stones all have grooves on their sides. These are the marks caused by dragging the stones and raising them into position.

Read more about the Aqueduct of Segovia

From the Aqueduct, walk towards the Jewish Quarter along Calle Cervantes to Mirador de la Canaleja. Stop at the Mirador for views over the south of the city. At this point you are now passing into the old city. Just opposite the mirador is the Casa de los Picos. While walking look at the façades of the buildings many of which are decorated with geometric and plant motifs.

The Casa de los Picos is a very particular building, from the 15th century, featuring a facade with over 600 granite points. However, there’s not much to do, as it now houses an applied arts school. It is simply a great place to admire, and to take some great pictures

As you pass C. del Obispo Gandasegui on your right look out for the Casa de los del Río. It has an attractive courtyard with Renaissance columns from the 15th and 16th centuries, inviting travelers to look out and discover this historic building. The structure is the most common of the courtyards in the city of Segovia, and is divided into three porticoed sides and one without columns.

Turn to the left on the C. la Alhóndiga is the Palacio de Cascales (Palacio del Conde Alpuente) which is a “Mudejar Palace” from the XV century. This building is actually the ‘Headquarter’ of the ‘Servicio Territorial de Fomento de la Junta de Castilla y León’. The building is included in the year 1985 in the ‘List of Heritage Cities’.

You can carry on down this street to see the La Alhóndiga a corn exchange built at the beginning of the 16th century during the reign of the Catholic Monarchs. They hold temporary exhibits there so it is worth popping your head in to see what is happening.

The Plaza de Medina del Campo is a beautiful square in the centre of Segovia. Among the inhabitants of Segovia, it is known as Plaza de Juan Bravo or Plaza de las sirenas – due to the  two fantastic statues of spinx. Flanked by the beautiful 12th century Church of San Martin on one side and by nice looking hotels and shops on the other. At the centre of the square is a set of steps that take you up to the old Lozoya watch tower . On the way up you’ll also pass a monument to Juan Bravo, one of the leaders of the failed Revolt of the Comuneros. There’s a restaurant near the top of the steps and because it’s about 5 metres above the street level, it’s a nice pace to sit and people watch.

To the left of the church head down Carrer la Prta de la Luna, where you will pass through the Puerta de la Luna also known as the Moon Gate. This leads you back through the City Walls to the avenue of Paseo del Salón.

From the Paseo del Salón, you have a good view of part of the city’s green belt, and the Alcázar fortress to the left. You can then go up through the Puerta del Sol arch to Calle de la Judería Vieja (the old Jewish Quarter), turn left to Plaza Corpus and visit the former Main Synagogue.

Dominating the Plaza Mayor is the Cathedral. The Catedral de Segovia is an extremely impressive, cathedral built in the mid-16th century. A Gothic-styled Roman Catholic cathedral, the church was dedicated to the Virgin Mary.

Within the plaza, there is ample space to circle and marvel at the cathedral from all angles. I further recommend exploring the inside of the cathedral as well. While it isn’t free, the views from the tower are spectacular, and the artwork inside is amazing.

Turn right from the main entrance to the Cathedral and walk towards its rear. Head down C. Martínez Campos, where you are walking alongside the city walls. At the end double back slightly to see the entrance of the Puerta de San Andrés. Walk along C. del Socorro to the Casa del Sol (House of the Sun) – Museo de Segovia

Casa del Sol – Museo de Segovia is an enduring museum dedicated to local archaeology, ethnology & fine arts, housed in a former fortress. It is a modern well laid out museum, presenting in chronological order the history of Segovia. It has an excellent collection of pre-historical and Roman artefacts. There is an English translation on most of the larger display boards.

Carry on walking along the city walls and Rda. de Don Juan II.

As you approach the Alcázar you have great views out over the city walls.

Next, you’ll proceed to the Alcázar of Segovia. The Alcázar is most-known for its distinctive, “bow of a ship” shape. Furthermore, it is rumored to have inspired Cinderella’s Castle at Disney World.

While it was first referenced in 1120, the Alcázar has history well before that. Built initially as a Roman fort, then covered with Muslim influence, several royals have since left their mark on it.

After exploring the plaza and gardens preceding the Alcázar, I strongly recommend entering the castle as well. While it does cost money, the return is phenomenal: breathtaking views, an educational experience, and incredible architecture.

Read more about the Alcázar of Segovia

Leave the castle behind and head down Atajo cuesta de la zorra, with views to your left. Turn the first left and go down C. la Prta de Santiago towards the Puerta de Santiago. Right and then next left on the calle de la moneda (stret of the Money).

Cross the river and turn left, continue for some time as your views of the castle become increasingly impressive.

The Mirador de la Pradera de San Marcos is a patch of field  with impressive views of the fairy tale Alcazar of Segovia from the base of the cliff. from here you can walk back through the town or carry on around to get more photos of the castle. 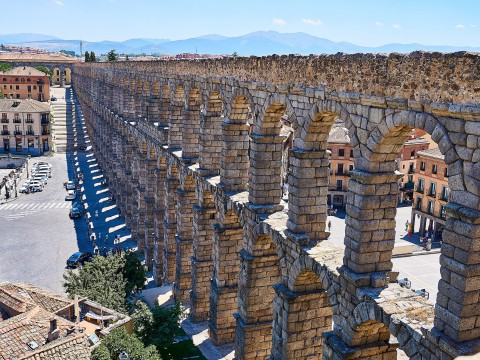