The Saadian Tombs  are a historic royal necropolis in Marrakesh, Morocco, located on the south side of the Kasbah Mosque, inside the royal kasbah (citadel) district of the city. They date to the time of the Saadian dynasty and in particular to the reign of Ahmad al-Mansur (1578–1603), though members of Morocco’s monarchy continued to be buried here for a time afterwards. The complex is regarded by many art historians as the high point of Moroccan architecture in the Saadian period due to its luxurious decoration and careful interior design. Today the site is a major tourist attraction in Marrakesh.

History of the Saadian Tombs

The early history of the necropolis is not well known. The necropolis is located right behind the qibla wall (in this case the southeastern wall) of the Kasbah Mosque which was built, along with the surrounding royal kasbah (citadel), by the Almohad caliph Abu Yusuf Ya’qub (al-Mansur) in the late 12th century (1185-1190). Accordingly, it is believed that this was the site of a necropolis even in Almohad times, though there’s no evidence of any significant figures being buried here at that time (the Almohad rulers were buried at Tinmal instead). It is known, however, that in the 14th century, during the Marinid dynasty period, Sultan Abu al-Hasan was buried here temporarily in 1351. He died while in exile in the High Atlas mountains and Marrakesh was thus the closest city for burial (which, under Islamic tradition, must be carried out quickly). A few months later his body was then moved and reburied in the Marinid royal necropolis at Chellah (near Rabat). A marble tombstone with a long inscription attests to his first burial in the Marrakesh kasbah necropolis, and this tombstone is still found in the Chamber of the Three Niches in the Saadian tombs today (presumably moved there during or after Saadian construction). The Marinid sultan’s burial here suggests that it must have already been a cemetery at the time. Afterwards, the necropolis also became the burial site of the Hintati emirs who controlled the region of Marrakesh from the mid-15th century until the 1520s. Some of their epitaphs are still visible today.

The present necropolis dates generally from the Saadian period but there are still some questions about the chronology and attribution of the various constructions which have not been resolved beyond doubt.The most generally cited timeline and the most complete analysis was laid out by Deverdun in 1959, based on a number of arguments and lines of evidence.

The necropolis has two major structures: one to the east, surrounded by gardens on either side, and one to the west, next to the visitor entrance today. The eastern mausoleum started out first as a simple square mausoleum chamber adjoining the southern wall of the Kasbah Mosque. It is believed that this first mausoleum was built by the second Saadian sultan of Marrakesh, Moulay Abdallah al-Ghalib, between 1557 and 1574. Abdallah was already a prolific builder throughout his reign and it seems he wished to erect a mausoleum to honor his father Muhammad al-Sheikh, the founder of the dynasty, who was killed in 1557 and buried here in what was probably a simple grave.Before Muhammad al-Shaykh some Saadians – most notably al-Qai’m, the dynasty’s founder, and Ahmad al-Araj and his sons – had been buried in the Zawiya of al-Jazuli and its adjoining cemetery in the city.

Abdallah al-Ghalib himself was eventually buried next to his father in 1574, in the new mausoleum he had built. A dedicatory marble inscription panel was placed on the wall at the head of his tomb, but this panel was later moved (at an unknown date and for unknown reasons) to the Chamber of the Three Niches in the later western building.It is probable (but unconfirmed) that the fourth Saadian sultan, Abd al-Malik, was also buried next to Muhammad al-Sheikh (also his father), on the south side of the latter’s tomb, in 1578 or after.

The next building phase took place during the reign of Ahmad al-Mansur, another of Muhammad al-Sheikh’s sons and the most powerful and wealthy of the Saadian sultans, between 1578 and 1603. When al-Mansur’s mother, Lalla Mas’uda, a wife of Muhammad al-Sheikh, died in 1591, he decided to have her buried within the same mausoleum chamber as that of his father. It was most likely on this occasion, or slightly after, that al-Mansur decided to modify and expand this mausoleum. He allegedly redid the decoration of the existing chamber, and added two rectangular loggia rooms on its eastern and western sides. He also created a much larger rectangular chamber (the so-called Grand Chamber) on the southern side, connected directly to the other three rooms. It’s possible that al-Mansur intended this larger chamber to house his own tomb. At some point, he probably also commissioned two more dedicatory marble inscription panels to be placed at the heads of the tombs of his father (Muhammad al-Sheikh) and his mother (Lalla Mas’uda). Again for unknown reasons and at an uncertain date, Muhammad al-Sheikh’s dedicatory panel was moved to the western building and placed on the back wall of the Chamber of the Twelve Columns, where it is still visible today. The panel dedicated to Lalla Mas’uda has remained next to her grave (although it may have been moved around too).

At some point during al-Mansur’s expansion and embellishment of the eastern mausoleum, between 1591 and 1598 (or before 1603 at latest), he decided to abandon this work and embarked on the construction of an entirely new building to the west. This new mausoleum was clearly intended for his own burial. The building was divided into three chambers, from south to north: the Chamber of the Mihrab (a prayer room, not originally meant to house any tombs), the Chamber of the Twelve Columns (a regal tomb chamber for himself), and the Chamber of the Three Niches (an annex to the main chamber). The first person to be buried in this building was in fact one of al-Mansur’s wives, Mahalla, in 1598, in a spot close to the eventual tomb of her husband in the Chamber of the Twelve Columns. Ahmad al-Mansur himself was buried in the center of this chamber upon his death in 1603. Some of the decoration in the Chamber of the Mihrab may have been left unfinished after his death. After al-Mansur, a number of other family members, including his successors, were buried in this chamber with him. Among the more important ones, the first was another of his wives, Lalla Aisha as-Shabaniyya, in 1623. Then it was their son, Sultan Moulay Zidan, in 1627, followed by Sultan Abd al-Malik II in 1631 and Sultan Muhammad al-Sheikh al-Saghir in 1653–54.  Today, Moulay Zidan’s epitaph is immediately to the right of his father’s while to the left is Muhammad al-Sheikh al-Saghir. The ornate tombstones (of a type called mqabriya) over these five important royal family members (i.e. al-Mansur, Lalla Aisha as-Shabaniyya, Zidan, Abd al-Malik II, and al-Sheikh al-Saghir) are also the largest and finest in the mausoleum, carved in Carrara marble.  Their strong similarity in style and craftsmanship has been argued as evidence that they were created by the same artisan or workshop of artisans between 1603 and 1655, with the mqabriyas of the first two (al-Mansur and Lalla Aisha as-Shabaniyya) probably being commissioned by their son Moulay Zidan and then serving as models for the other three tombstones made later. A number of other lesser royal family members are scattered around the chamber.

The necropolis continued to be used as a burial place for some time after al-Mansur’s death. The Alaouite sultan Moulay Isma’il (ruled 1672–1727), who plundered the Saadian palaces, later restricted access to the Saadian necropolis by sealing it off from most of the surrounding buildings. Nonetheless, it continued to be used even in the Alaouite period, as evidenced by the profusion of graves and tombstones scattered around the cemetery today. The large rectangular chamber (or Grand Chamber) on the southern side of Muhammad al-Sheikh’s and Lalla Mas’uda’s mausoleum was filled with other tombs. The Chamber of the Mihrab, the southern chamber of Ahmad al-Mansur’s construction which was intended to be used merely as a prayer room, was used as a mausoleum by the Alaouite dynasty up until at least the late 18th century. It is now filled entirely with the graves of Alaouite family members.[7] One of these graves is reputedly that of the Alaouite sultan Moulay al-Yazid (died 1792), which was previously marked off by a wooden balustrade and which was sometimes visited by local pilgrims.[7] Moulay al-Yazid’s name is now also associated with the Kasbah Mosque and with the square in front of it. In total, the necropolis now contains 56 tombstones marked with mqabriyas (ornate marble epitaphs) and another hundred or so tombs marked simply with multicolored tiles.

Eventually, the necropolis was isolated from the surrounding streets and fell out of use. In 1917 they were “rediscovered” by the Service des Beaux-Arts, Antiquités et Monuments historiques (“Service of Fine Arts, Antiquities, and Historic Monuments”) of Morocco, an official body created in 1912 with the beginning of the French Protectorate over Morocco. By then, the tombs were in state of severe disrepair, and from 1917 onward the Service carried out a careful restoration process.Missing parts of the decoration were restored by using surviving parts as a model.  The work also opened up the site to the general public for the first time.  From the 1920s onward the tombs became the object of study by scholars. Today, they have become a major tourist attraction in Marrakesh. 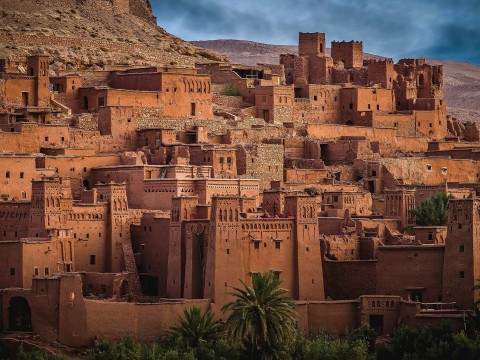 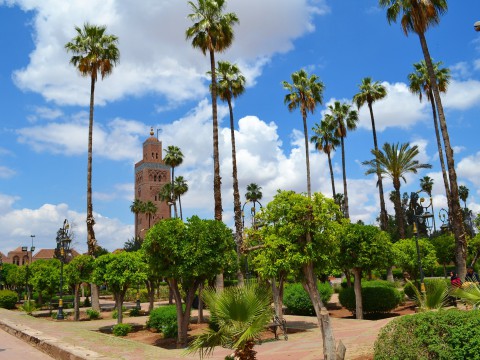