Cathedral and Historic Building in Cádiz

Cádiz Cathedral  is a Roman Catholic church in Cádiz, in Spain. The cathedral took 116 years to build, it was started in 1722 and not complete until 1838 and a consequence of this is that a mix of styles can be seen from Baroque, rococo to neoclassical. The towers and the sacristy were the last elements to be built in the 19th century. The church has a dome of golden tiles which gives it an imposing almost Moorish appearance. Other highlights include the some beautiful Baroque images, the vaults of the high altar and the choir stalls, although the latter were not originally from the cathedral.

The composer, Manuel de Falla, for whom the concert hall was named, and the poet and playwright José María Pemán, who were both born in Cádiz, are buried in the crypt.

Since 2003, the Torre de Poniente tower has become a new tourist attraction in the city. The bell tower, whose construction began in Cadiz’s golden age in the 18th century, can be reached via the ramp. The top of the tower affords outstanding views over the city below.

The church was built with profit from the trade between Spain and the West Indies, Central and South America, and was known as “The Cathedral of The Americas”.

Other names of Cádiz Cathedral 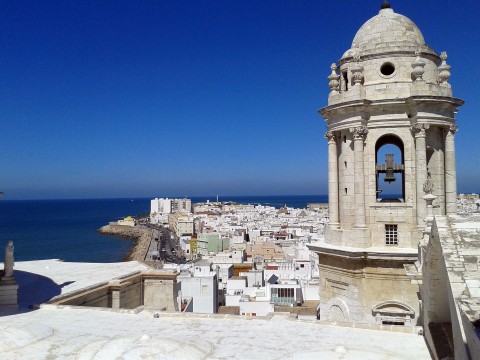 A Day in Cádiz

Occupying a tiny peninsula on the south coast of Spain, Cádiz is a beautiful old city that is well worth a visit. The old town is on the tip of the peninsula and is steeped in history.