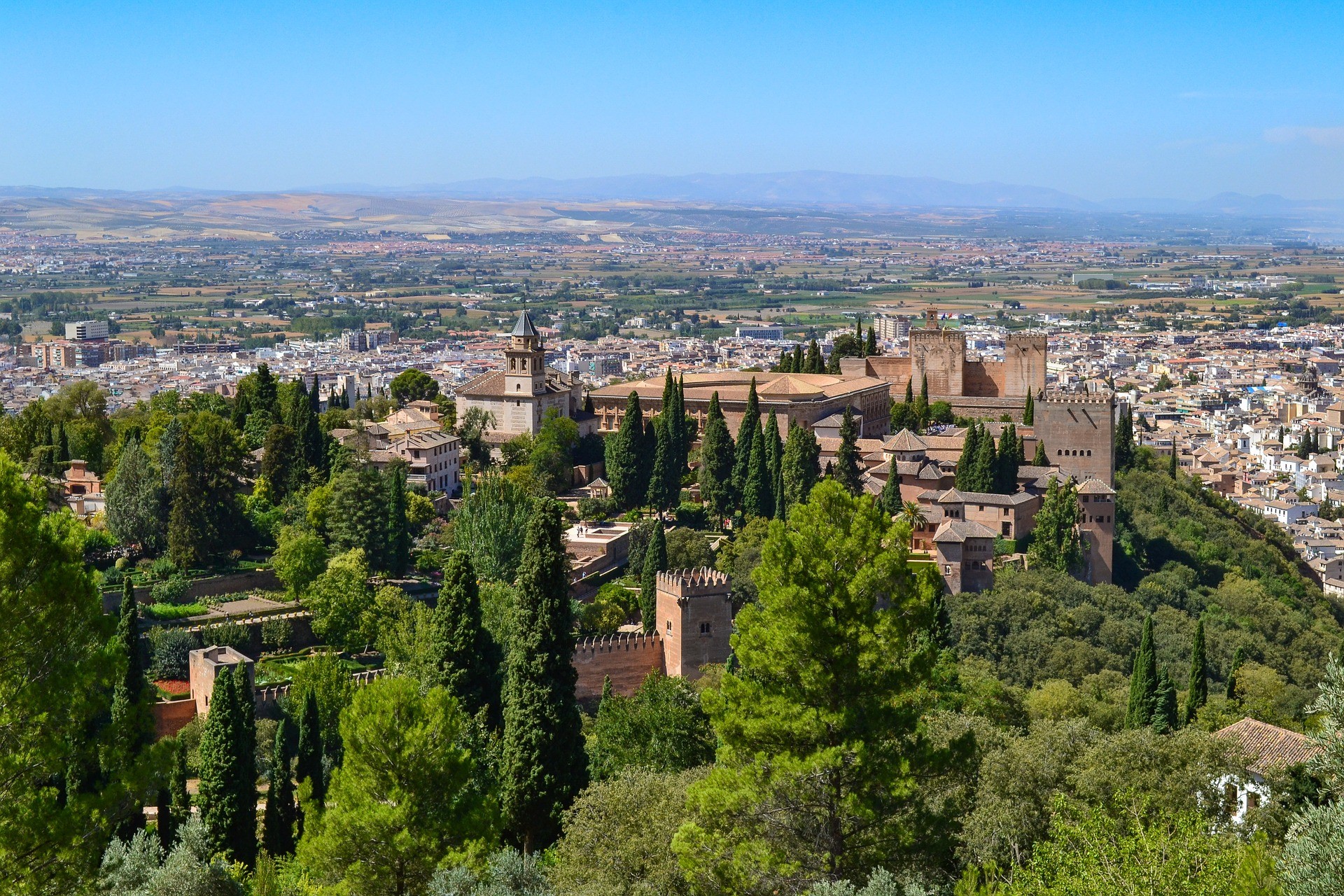 The Paseo de las Torres or Promenade of the Towers, is a landscaped promenade dotted by various towers, gardens, and Nasrid ruins. It connects the Jardines del Partal with the Alhambra Alta and the Generalife.

We will start just to the north of the Church of Santa Maria de la Alhambra at the Torre de la Rauda. The tower used to be a entrance to Palacio de los Leones.

The Tower takes its name from the Royal Cemetery that is locate just to its south, which was thought to be the burial place of the kings of Granada. Rauda means garden, cemetery or paradise in Arabic. It is thought that King Boabdil took the remains of his ancestors with him when Granada fell to the Christians.

Walk through the Gardens of the Partal to the Torre de las Damas or Tower of the Ladies. The tower has also been called “Partal“, which means portico, because of the portico formed by the five arches that often reflect on the rectangular pond. The gardens and the palace get its name from this. The Partal or Portico palace was built by Sultan Muhammad III (1302-1309) and is the oldest preserved in the Alhambra.

The Torre de las Damas is a spectacular viewpoint from which you can see both the Albaicín and the Generalife.

To the left of this tower are three small Arab houses, built after the tower and attached to it. In one of them some paintings were discovered which, although deteriorated and incomplete, are the only paintings of this type in Muslim Spain. Made in the first half of the s. XIV, represent hunting scenes, fantastic animals, men and women.

This small tower rises to the right of the portico of the Partal and on the adarve of the wall. The Nasrid Sultan Yusuf I (1333-1354) had it built. The interior of the oratory, for private use, is decorated with plasterwork based on Kufic inscriptions and plant or vegetal motifs.

The façade, which has a horseshoe arch in its center, still preserves remains of the decorative plasterwork. The interior room is divided into two unequal parts by a semicircular arch. The mihrab, with a roof made of assembled wood, is very similar to that of North African mosques. The following inscription can be read on its horseshoe-covered arch of muqarnas: “Come and pray and do not be negligent.“

Leaving the Partal Gradens, you come to the Palace of Yusuf III (1408-1417).  Standing out from the gardens is the long pool which would have sat in the central courtyard. It is surrounded by lush gardens which are scattered with the ruins of the palace. It would have resembled the Palacio de Comares. During the days of the Catholic monarchs the palace was the domain of the the Lords of Mondéjar, or Tendilla, who ruled the palace on behalf of the Royals.

Towards the front of the courtyard are the remains of a tower overlooking the open patio. The remains of the tower form a terrace that provides one of loveliest views to be had in the Alhambra.

This distinctive three-story tower is known by this name for its battlements which are finished with brick pyramids. The tower served to defend an entrance to the fortress. A stairway descends from the tower to the to its base which ends at the Puerta del Arrabal. In the days of the Catholic monarchs barracks and protective bastion was built around the bastion below Puerta del Arrabal to give it more protection. This bastion has another exit called the Puerta de Hierro, or Gate of Iron.

This tower forms a mysterious and fantastic set that inspired Washington Irving to describe the powerful and wealthy Jew Almamen, who was hiding in this place to seek revenge against the seducer of his daughter.

The next tower along the battlements is a small watch tower the Torre del Cadi or Tower of the Judge. In the 16th century it was also called the Torre del Preso or Prisoner’s Tower. Although its most interested name is from the 17th and 18th centuries when it was called the Torre del paso de la zorra or The passing of the Vixen.

This tower was restored in 1924 and faces the alley that leads to the original entrance of the Generalife.

The Torre de la Cautiva or the Tower of the Captive because according to romantic legend Isabel de Solís was held prisoner here before becoming the Sultan’s wife and changing her name to Soraya.

The Torre de las Infantas or Tower of the Princesses is a small tower / palace from the mid 15th century.

Legend has it that the Kingdom of Granada, was ruled by a Sultan named Mohamed “The Left-Handed”, who married a Christian captive and they had three beautiful daughters. The Sultan consulted an astrologer to read his daughters futures. He was told that he would not have to worry until his daughters were of marriageable age, but he should carefully guard them. The fearful Sultan decided to watch over them from a young age, and locked them in a tower of the Alhambra, that is, with all the luxuries at his fingertips. Thus his three daughters Zaida, Zoraida and Zorahaida,  grew up locked in the tower until they were already of marriageable age.  From the tower, they could see a group of Christian knights who had been taken prisoners, and fell in love with them. They wanted to become Christians, escape and marry the prisoners. They planned this with the help of their nursemaid. On the night of their escape the youngest, Zorahaida changed her mind as she did not want to go against her fathers wishes. Her two older sisters lived happily with their knights in Córdoba, while Princess Zorahaida was kept in the tower, her spirit still lives there waiting for her Christian knight to rescue her.

The Torre del Cabo de la Carrera or Tower at the end of the Street get its name as it is positioned at the end of the Calle Mayor of the Alhambra. All that s left of the building is its lower walls, since it was destroyed by Napoleon’s troops in 1812 when they left Granada.

There was an inscription which said it was restored in 1502 by the Catholic Monarchs.

The Torre del Agua or Water Tower is the most eastern tower. It was called the Water Tower as it guarded the aqueduct that carries the water from the Generalife to the Alhambra. These waters came from the Darro river through a mix of pools, cisterns and wells and supplied all the water to the inhabitants of Alhambra.

Similar to the Torre del Cabo de la Carrera it was blown up in 1812, with only its foundations left. Its walls have been reconstructed although it is hollow inside.