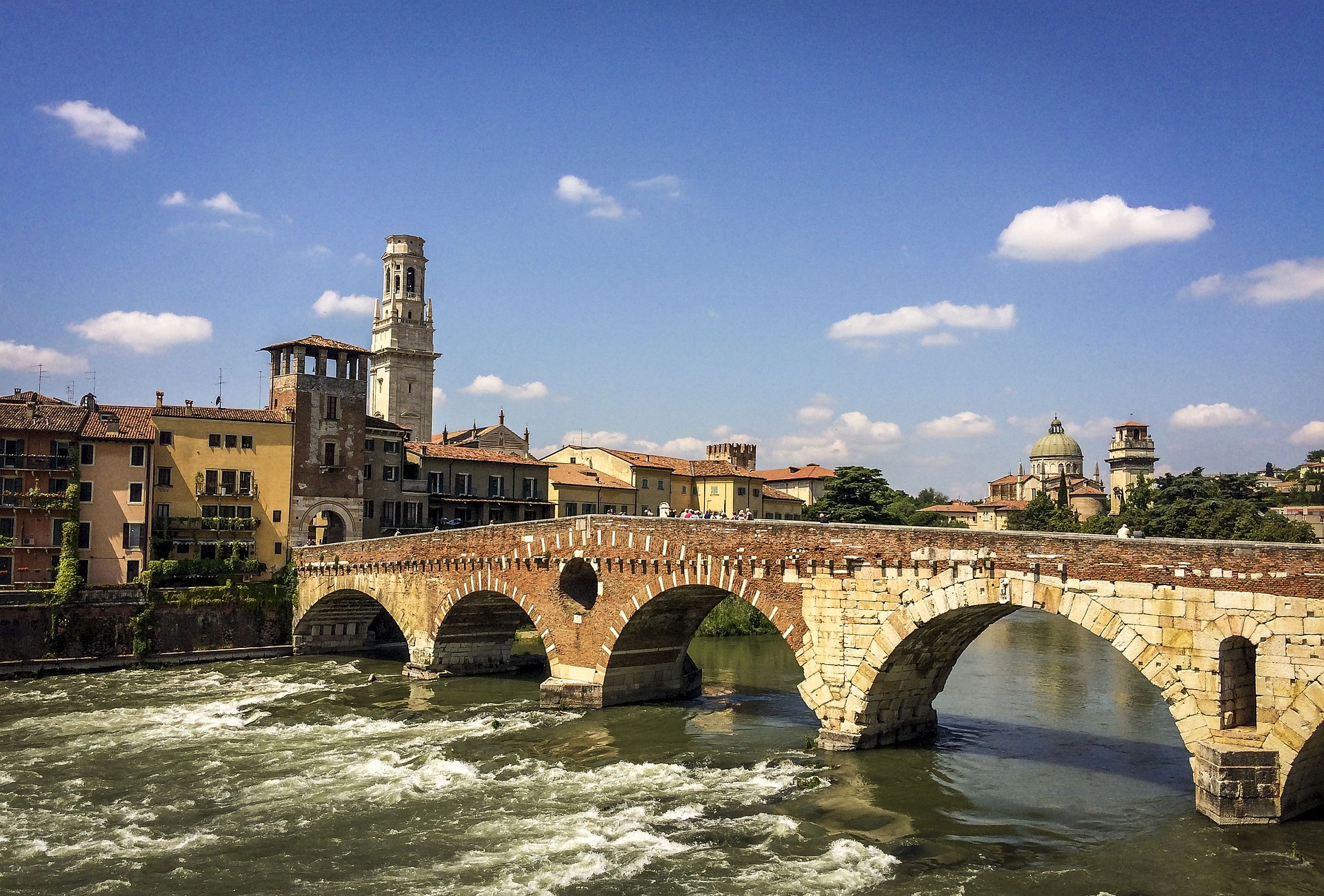 Self Guided Walking Tour of Verona (with maps!)

A trip to Verona is a plunge into the emotions of bygone times, of a city that conserves values and forms related to an ancient past of medieval and renaissance splendour, albeit it is in constant expansion in our own day. According to the poet, Shakespeare, “There is no world outside these walls…” but this also expresses the impression that strikes tourists when they enter the ancient walls that surround the city.

The city of Verona has been immortalized by William Shakespeare in his famous “Romeo and Juliet”. There is also another, lesser-known play by Shakespeare set in Verona, called “The Two Gentlemen of Verona”. Whilst there’s no evidence that the bard had ever set foot in Italy, let alone in this town, Verona’s presence in his work has inspired massive tourism here ever since – primarily to the 13th-century Juliet House with a tiny balcony upon which she supposedly once stood.

If arriving by car – avoid the historic centre or you may well be fined. Try parking at Parcheggio Porta Palio – free parking and only 10-15 minutes to the main centre. If they are full there are more car parks if you head towards Porta Nuova (continue on outside the city walls.) The San Bernardino Bastion, Porta Palio and Porta Nuova and all port of the early 16th century city defences.

Should you get the Verona Card?

It is worth deciding at this point if you are going to purchase the Verona 24-hour city pass (€20). Here is a quick breakdown of costs for paying separately to visit the following attractions.

You can buy the card at the city tourist office (from the square walk along the road with the  city walls to your right and the Arena and the Barbieri Palace (Verona Town Hall) on your left) or get hold of it online before your trip on sites such as GetYourGuide >>> check the price and availability of the Verona Card here.

If you are arriving later in the day and were planning to see the outside of the Arena, the courtyard of Juliet’s House, to see the balcony, Lamberti Tower (€6), Teatro Romano (€4.50) and Castelvecchio Museum (€6).

The Bra Square is the largest city square in Verona. It is the location of Verona Amphitheater, City Hall, Palace of Gran Guardia, and many other historical buildings. The square is surrendered by many cafes and restaurants. A statue of Victor Emanuel II on horseback, the balcony of the Honori Palace where one of Italy’s founding fathers Garibaldi gave his famous speech “Rome or Death”, and stone carvings of saints are just a few of the sites you will see here.

Located on Piazza Bra, this Roman amphitheatre can seat up to 22,000 people and was built in 30 AD. It is home to the Verona Opera season each summer. The arena is known for its superb acoustics. Over 500,000 people visit this place each year.

Obviously one of the most iconic places to see in Verona. However after reading the reviews on trip advisor I did query whether it is worth the visit. Basically it feels like a music arena not a trip to 2000 years into the past! (If you want Roman remains that don’t miss out on Verona’s Roman Theatre & Museum, at the end of this itinerary. )  My take on it is, if you have the Verona Pass, you don’t queue and you aren’t  paying any extra to enter, then go for it. Pop in, if you are bored, leave and head straight to the Museo di Castelvecchio (Old Castle Museum), but at least when someone back home asks you if you have the Verona Arena you can look them in the sys and can say yes! If you don’t have the Verona pass, and you are facing a  €10 entrance and a 20 minute wait, then I would say, the best views are from the outside and head on.

The House of Juliet, is a 13th-century structure situated on the remains of a Roman insula building on the Via Capello. It is located near well-known Juliet’s Tomb.

Although many dispute whether or not Romeo and Juliet actually existed, the house remains a popular attraction that thousands of tourists visit each year. In fact, the house was formerly owned by the Capello family. Many guests write notes on the wall and the doors of the courtyard. From the balcony, one can even imagine ill-fated lovers talking to each other.

The dwelling contains a museum that displays frescoes, paintings, and artwork from the 16th and 17th century. One treat not to be missed is the bronze statue of Juliet. It is said that good luck will come to those who rub the right breast of the sculpture.

Entrance into the courtyard is free, but entry into the house is not. While the house tour is pretty basic, you can upgrade your ticket to include the tomb as the grounds are lovely and have some nice frescoes.

Market Square was originally the site of a Roman forum, or square, which hosted exciting chariot races. It is also known as the square of herbs. Historically, various aromatic spices, herbs, coffee beans, and textiles were shipped to Venice and imported to Verona’s Market Square.

In keeping with tradition, the square hosts a market from Monday to Saturday. This market features souvenir vendors as well as farm-fresh produce and flowers.

The Lamberti Tower is an ancient tower in the Market Square. Construction on the tower began in 1172. The tower underwent restoration after a 1403 lightning strike. Visitors can see the different restoration work over the centuries by noticing different materials. For example, the marble areas were added in 1779. The clock was also added during the 1779 renovation.

The Lamberti Tower has two bells. The largest bell named Rengo is used to call residents to arms or call a city council. The Marangona bell signals fires, hourly chimes, and work times.

The Lords Square is packed with gorgeous architecture and is a fabulous place to soak up the history and culture of Verona.

This historic square has a strong connection with William Shakespear’s Romeo and Juliet, set in Verona. The Town Hall provided the setting where Bartolomeo della Scala banished Romeo and sentenced him to exile in Mantua.

Read more about the Arche Scaligere

Read more about the Sant'Anastasia, Verona

The Ponte Pietra, or Stone Bridge, is the oldest bridge in Verona. It was completed in 100 BC by the Romans. The Ponte Pietra crosses the Adige River. In Roman times, the Via Postumia connecting Genoa to Aquileia passed over the bridge.

Well-known for its many concerts, music performances, and ballets, the Roman Theatre seats 25,000 people. Having actually been built during the 1st century AD, it is one of the oldest monuments in Verona.

For centuries, the ruins of the theater were buried underneath residences constructed on the property. In 1834, a Veronese named Andrea Monga bought all the houses built on the property, then demolished them and began the renovation process. It is because of his efforts that the structure was saved.

In 1904, the city purchased the property and continued renovations until the 1970s. Although most of the structure was lost due to the ravages of time, the cavea, tier of seats, several arches of loggias, and parts of the stage and the old theater were recovered. One can truly take a step back in time when visiting the Roman Theatre.

The theater is well-known for its Shakespeare Festival held from June to August each year. Jazz concerts in May, plays in June, and ballets in August are just some of the treats to enjoy. Admission is free on the first Sunday of each month.

This medieval fortress is set high on a hilltop above Verona. The hilltop location was chosen as the ideal location to protect the city against intruders. The Romans used this hilltop as a defensive position.

During Roman times, the hill was known as Monte Gallo, or Rooster Mountain. The Romans also revered this location as a religious site and built a temple and theater here.

The hill was later named Colle San Pietro when a Medieval church dedicated to St. Peter was built on the site. The area was next fortified with battlements typical of medieval fortresses. Between the 14th and 15th centuries, the Castello Visconteo (the Castel of the Viscount) was built.

In 1801, the Napoleanic army destroyed most of the buildings on this historic site. Later, Austrian soldiers arrived and destroyed St. Peter’s Church. The Austrians built barracks that are still in place.

Today, visitors can climb the switchback stone steps to the top or take a funicular cable car to the top of the hill. This hilltop location is a beautiful place to view the city of Verona, take pictures, and watch the sunset. There’s also a restaurant at the top of the hill so you can relax and enjoy a meal or drinks.

The Verona Cathedral is dedicated to the Blessed Virgin Mary. It was built after the previous churches on this site were destroyed. The Romanesque style Verona Cathedral was consecrated in 1187. The west facade features a double porch, Lombard bands, and small pinnacles.

The Borsari Gate is an ancient Roman gate that was built in the first century AD. It was previously called the Lovia Gate and then the San Zeno Gate before receiving its current name. The original structure was brick and contained an inner court. It was rebuilt in 265 and given a limestone facade. The upper part of the gate features 12 arched windows.

Arco dei Gavi is a monument in Verona, located just outside the walls of the ancient Roman city. The arch was built in the 1st century to celebrate the gens Gavia, an important Roman family of Verona.

The Old Castle Museum is a museum located in the eponymous medieval castle. The castle was built between 1354 and 1356 to protect the family of Lord of Verona from enemies and to give them ample time to escape. The palace was used to house military weapons and munitions in the 1400s and eventually became the seat of the Venetian military academy in the 1700s. In 1925, it was made a museum.

Scaligero Bridge is a three-arch bridge that spans the Adige River. It was built in 1375 for the Scaliger family who wanted to use the bridge as an escape route from the Old Castle to the river. 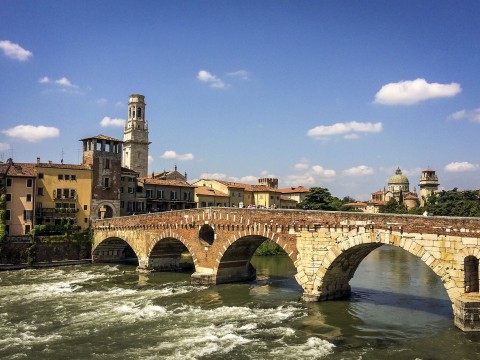 Self Guided Walking Tour of Verona (with maps!)

A trip to Verona is a plunge into the emotions of bygone times, of a city that conserves values and forms related to an ancient past of medieval and renaissance splendour, albeit it is in constant expansion in our own day. According to the poet, Shakespeare, “There is no world outside these walls…” but this also expresses the impression that strikes tourists when they enter the ancient walls that surround the city.