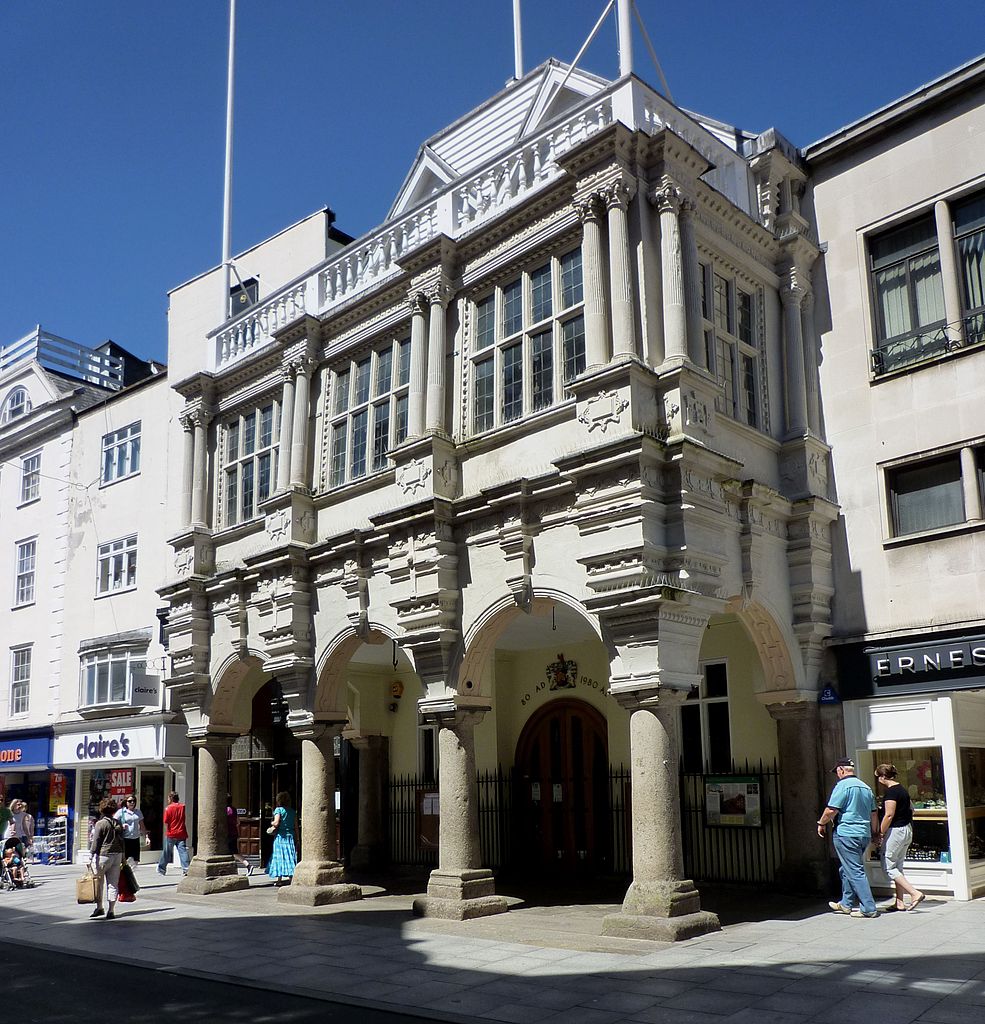 Discover Exeter’s rich and varied history on our exciting self-guided walks. Exeter’s compact size makes it easy to explore on foot – and there is plenty to discover along the way. Explore fascinating Roman vestiges, shopping areas and wonderful architecture.  The city’s Quayside area is the ideal destination for a relaxing stroll, whilst taking in the the beauty of the River Exe and Canal.

The first part of our tour takes us through Exeter’s historic past as a wool town. By the early 1700s Exeter was a very wealthy city, thanks to wool. Exeter’s prominence in the cloth industry was due to its proximity to spinners and weavers throughout Devon, and the fact that cloth was finished on Exe Island. The cloth was loaded onto ships at Exeter Quay and exported to France, Spain, Holland and Portugal. Business thrived until the effects of the Napoleonic Wars and the dominance of the mechanised mills of the north of England led to the decline of the woollen cloth trade in Exeter.

We will then explore the old town to explore its medieval past.

The Middle Ages were a period of rapid growth for Exeter. It became the religious, commercial, and administrative centre for the region. Throughout the period following the Norman Conquest in 1066 until the reign of Henry Tudor in 1485 (Henry VII), a complex relationship between the Crown, Cathedral and City developed.

This is the start of the Exeter Ship Canal. It first opened to shipping in 1566 and was the first canal to be built in Britain since Roman times. It was also the first canal in England to use the pound lock.

Cross over the Cricklepit Bridge, built in 1988 to link the quayside with Haven Banks. Or if you are in the Summer and feeling brave you can cross the Butts Ferry, a hand-operated pedestrian cable ferry. After using the bridge, bear left to reach the Visitor centre at the customs house. If you used the ferry head left.

The Quay House was re-built in 1680-1 at the height of Exeter’s woollen cloth industry. The building was used to store cloth and other goods before they were loaded and transported down the canal. It also had an overhanging roof, which enabled cargos to load and unload out of the rain.

Today the history and development of Exeter’s Quayside is brought to life with lively displays, illustrations and artefacts. There is also the opportunity to see “Exeter – 2,000 years of history,” an exciting audio-visual presentation highlighting Exeter’s history from Roman times to the present day. The Quay House Visitor Centre provides tourist information, Quayside treasure hunts, an accommodation booking service and a gift shop selling local pottery, replica maps and a wide range of local interest books.

Just beyond along the canal are the olds warehouses the which today are used by crafts and antiques shops to sell their wares  and places to eat and drink. After the decline of the woollen cloth industry this area of the Quay was still busy with the storage and transportation of grain, wine and oil.

Head back along commercial street, with the canal on your left. lookout for the Bishop Blaize Pub, behind it is Cricklepit Mill.

This area you are now in was called Exe Island, it was once the very heart of the Devon cloth industry packed with mills, fulling stocks, cloth drying sheds and racks. You can imagine the noisy activity of workers with heavy hammers pounding the newly dyed cloth. The fulling mills were powered by water via man-made channels called ‘leats’.

Cricklepit Mill was one of many in Exeter, including three on the Quay, but most have gone or are in a bad state of repair. Cricklepit Mill now offers a small visitor centre and wildlife garden where we run a range of events and activities for the general public.

Read more about the Cricklepit Mill

At the end of commercial street take the subway on the left of the road and you will come out in a park and see the Old Exe Bridge.

This is where the first bridge across the River Exe was built in 1200. During the boom years of the woollen cloth trade, packhorses and horse drawn carts trying to get in and out of town would regularly get held up on the narrow bridge.

You need to head to the raised New Bridge Street. There are step on the other side of it, climb the steps and head left up Fore Street.

Members of the Cloth Workers Guild met here to make decisions about their trade. They would discuss such things as quality standards and apprenticeships. You can see the tools of their trade in the ironwork on the gate.

Read more about the Tuckers Hall

Carry on up fore street to Mint Lane, at the end of which is St Nicholas Priory.

Part of this historic building was home to two of the city’s most prominent wool merchants. The Priory was built almost a thousand years ago as a Benedictine monastery and was partly destroyed during the Dissolution of the Monasteries in 1536.

Retrace your steps to fore Street and continue along it. It turns into high Street and the Guildhall is on your left.

For over 800 years the Mayor and Council have regulated the affairs of Exeter from the impressive Guildhall. The homes, shops and offices of wealthy merchants were also built in this area. You can
still see the beautiful timber fronts.

Read more about the Exeter Guildhall

Continue along the High street until you reach castle street. Dont miss out on the information panels on you left. Turn right onto Bailey Street, turn left into Northernhay Place then up the hill into Northernhay Gardens.

The site of Northernhay Gardens was quarried in Roman times for stone from which to build the adjacent city walls. Walking through the gardens is a good way of seeing the walls.

Read more about the Northernhay Gardens

When in the park follow the higher path by the wall until you arrive just below Athelstan’s Tower (opposite the bandstand).

King Athelstan also built a castle on the highest ground inside the wall, on the Red Mount, now known as the Norman, Rougemont Castle. It is thought that the only part of his castle to survive is a part of the ruins known as “Athelstan’s Tower”.

Read more about the Athelstan’s Tower

Walk through Athelstan’s Tower through Rougemont gardens to see the Norman Gatehouse.

Although not strictly part of the wall, the castle was an important part of the city’s defences. Built in 1068 following the Norman siege of Exeter, it established a foothold of control for the Normans over the previously rebellious citizens of Exeter. This gatehouse is the oldest standing castle building in Britain.

Read more about the Rougemont Castle

Walk back through the Rougemont gardens, and pass through another gate in the walls. Note the herringbone structure of the walls. Turn left and continue through the park until you reach Queens Street. Turn left along it and RAMM is on your left.

The displays in the museum reveal Devon and Exeter’s rich history and global connections. Exotic animals, birds and insects delight children and the World Cultures galleries display stunning items from all over the world.

walk back the way you came, then cross Queen Street onto Northernhay Street, after 50 metres turn into Maddocks Row. At the end of Maddocks Row turn right into Paul Street and proceed to the traffic lights at the south end of the Iron Bridge. You are now at the site of The North Gate.

Cross the traffic lights and go straight ahead into Bartholomew Street East. Keeping the railings on your right, walk straight down the path to Bartholomew Terrace.

Snayle Tower:  On the corner of Bartholomew Terrace in front of you once stood a large semi-circular tower that dominated the defences to the west of the city. It offered an excellent observation point for the many sieges of the city particularly during the English Civil War.

West Gate: This gate was the main entrance to the city from Plymouth and Cornwall and was a particularly busy place at the height of the woollen cloth trade.

Cross Western Way at the pedestrian crossing. Turn left and walk uphill to the first turning on your right (Lower Coombe Street) and proceed onto cobbled Quay Hill, at the bottom you will be at  Water Gate.

Water Gate: This gate was added to the city wall circuit for commercial rather than defensive reasons. During the 16th and 17th centuries this area was involved in the woollen cloth industry, be it finishing the cloth on Exe Island or exporting the cloth from the Quay.

Continue on the footpath up the hill to Western Way.From here either cross Western Way via the Yaroslavl Bridge, or to your right over the pedestrian crossing. The next board is located on the other side of South Street. Here you will find out about the South Gate.

From here either cross Western Way via the Yaroslavl Bridge, or to your right over the pedestrian crossing. The next board is located on the other side of South Street. Here you will find out about the East Gate.

South Gate: This was the most impressive of all the city gates. This stretch of wall was very vulnerable from attack, so a number of smaller towers were built.

Follow the footpath alongside the city wall to Cathedral Close, turn right on to Southernhay. At Southernhay turn left then continue behind Broadwalk House to discover more about the East Gate.

East Gate: Being the principal entry point to the city, this gate played a vital defensive role during the many sieges of Exeter, especially during the Perkin Warbeck rebellion.

From the end of the city wall head back to the High Street. You will pass on your left St. Stephen’s Church, which dates from the 11th Century.

The Cathedral is the jewel in Exeter’s crown. Exeter became a major ecclesiastic centre in the Middle Ages, not only was there a Cathedral, but within the city there were 32 parish churches, and around the area there were 7 monastic houses.

The cathedral area has been used as a place of worship since the 4th Century and eventually a Saxon Abbey was built. The Abbey became a Cathedral in 1050. From 1114 a new Cathedral was constructed, and in the 13th and 14th centuries the Cathedral was rebuilt in the Decorated Gothic architectural style.

If you walk anti clockwise around the cathedral you will come to St Petrock’s (Exeter) Ltd, and the Gates to the Close For over 500 years entry to the Cathedral Precinct would have been controlled by seven gates. The gates were erected following the murder of a member of the Cathedral clergy. 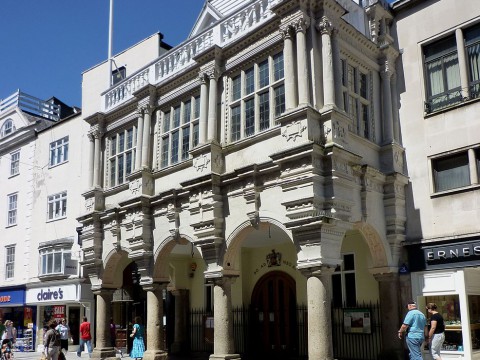 Discover Exeter’s rich and varied history on our exciting self-guided walks. Exeter’s compact size makes it easy to explore on foot – and there is plenty to discover along the way.