Piazza Vecchia (in Bergamo Piassa Ègia ) is the square of Bergamo located on the upper part of the city, seat for many centuries of the political and civil activity of the city formerly called platea magna nova . The square was connected by the portico of the Palazzo della Ragione with the Sancti Vincentii platea , which became the Piazza del Duomo .

The square is located on the old Roman forum. The excavations carried out at the Angelo Mai civic library have brought to light the ancient thistle that ran through this area. From the 11th century the square was occupied by houses and hovels. From the thirteenth century the reclamation of the area began, with the demolition of dilapidated structures and the connection with the square of San Michele all’Arco, and only in the Middle Ages did it become the city center, with the construction of the Palazzo della Ragione in the twelfth century seat of the municipality.

The buildings that surround it were built starting from the fifteenth century giving the square the almost perfect rectangular geometric shape, leading it to become the most important monumental center of Bergamo with the adjacent Piazza Duomo.

Among the many events that saw the square as a protagonist there is a particular one, the documentation of which is kept in the Angelo Mai library. On February 19, 1511 the massarolo certain Angelo da Vertova, had forwarded to the administration of the municipality the cost of the hanging and burning of a condemned man called de Rocha . In 1511 the city territory had been occupied by the French, and, considering that the hanging was a very serious sentence, it can be thought that it was a minor sentence but commuted for political reasons. It is likely that the structure of the gallows was stable on the square that is referred to as the square , therefore the most important in the city. The document describes in a minute way not only hanging with ropes andreforzino , but also the wooden bayta that was built to continue with the cremation. The purchase of paliferio to make el buso in piaza is indicated, which had to create the holes in the pavement, where the wooden poles that had to support the roof made up of small larch branches where the condemned were placed were fixed. The interior of that structure was filled with straw and hay so that it created a good fire which was kept going by the executioner with a pitchfork. The remaining ash was collected and taken to the monastery of San Francesco for burial. Everything is documented at a cost of Lire 16.3.

The square is located in the center of the upper town, in the part enclosed by the Venetian walls ; with an almost perfect rectangular shape and is one of the most important squares in Bergamo , having been the political center of the Orobic city for centuries. Since the public offices were moved to the lower part of the city to facilitate the relationship between administrators and citizens, the square and its buildings have become a tourist attraction and home to museums. To its right is the Angelo Mai library , which houses over 600 volumes and multiple foundations, and to the left are the Palazzo della Ragione with the truss room that hosts art exhibitions, and the Palazzo del Podestàwith the historical museum , in addition to the Campanone .

The ancient flooring was black and white checkered, as represented in some canvases and in the inlay by Fra ‘ Damiano Zambelli for the choir of the church of Santo Stefano . In the eighteenth century it was modified with a new diamond-shaped pavement of red bricks, then redone identical in the twentieth century .

Being closed to city traffic has allowed it to give the visitor a motionless image of time. In the center of the square is the Contarini fountain , built in 1780.

On the square stands the Caffè del Tasso , a historic place, adopted as a base by the people of Bergamo who decided to follow Giuseppe Garibaldi in the Expedition of the Thousand . 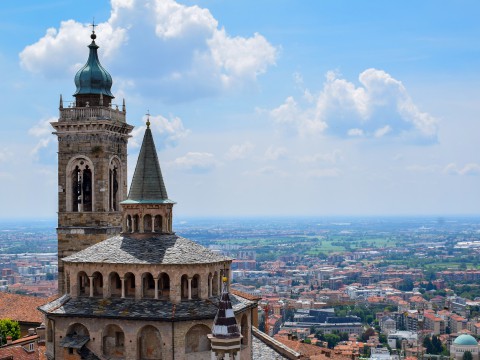 Bergamo is a city in two parts, High city (Città alta) which is the old town, and new Bergamo, Low city (Città bassa). If you are arriving by car, park by the station at the Parcheggio Ex Gasometro off Via San Giovanni Bosco and head to the train station.