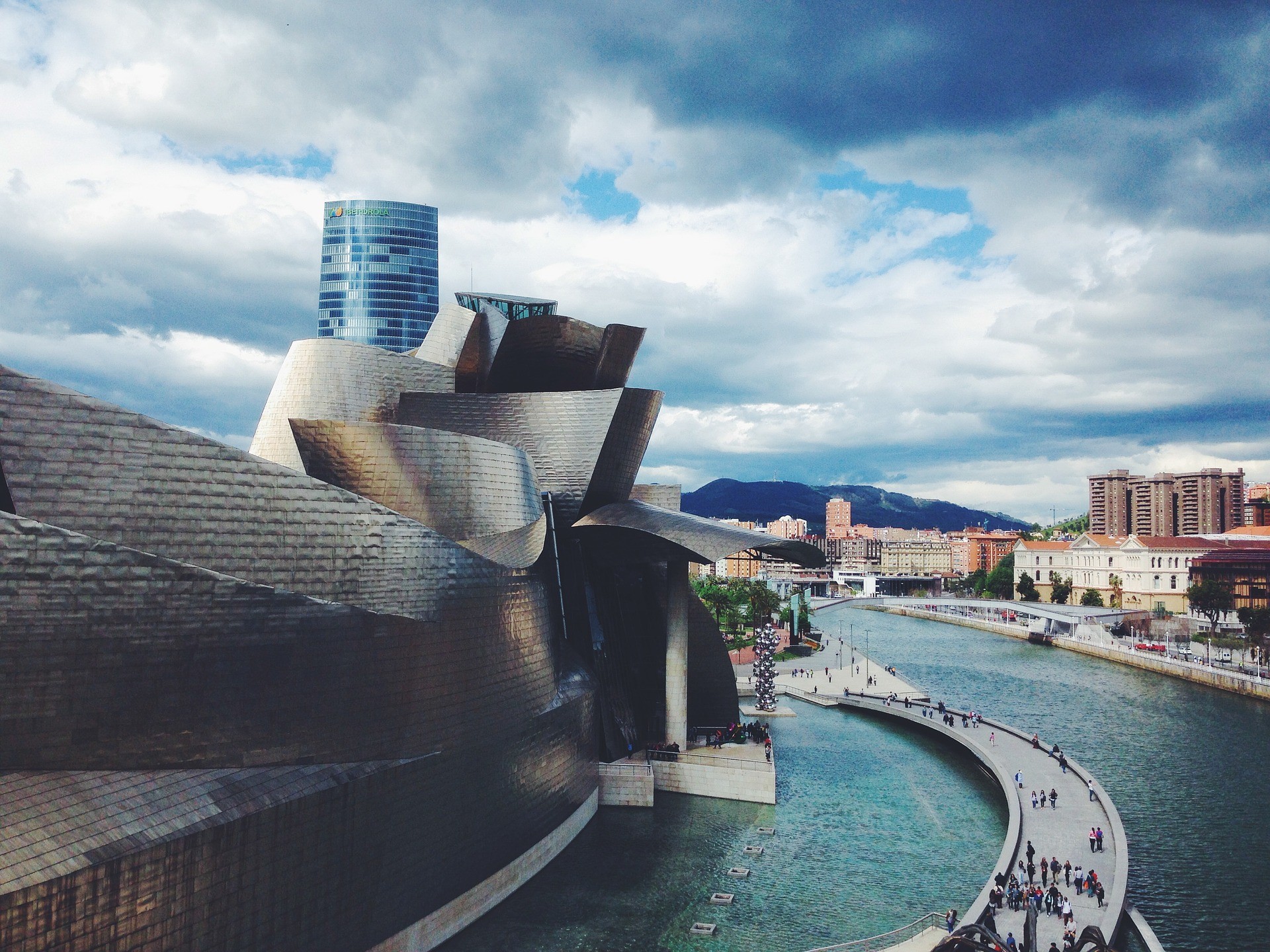 Located in the northern mountain range lies Bilbao, is one of the most cosmopolitan and cool cities of the Basque Country. Its credentials are no doubt significantly boosted when the Frank Gehry–designed Guggenheim Museum.

While not nearly as well-known as Barcelona or Madrid, it is the fourth most populated city in the country and is full of incredible things to see, do and eat!

1. Guggenheim Museum and the Arts District

Where better to start a tour of Bilbao than looking at the imposing Guggenheim Museum, located at the heart of the Arts District. One of the most popular destinations on Bilbao, it is also one of the most convenient to access! It is located on the banks of the river, all shiny with its titanium and glass. The magnificent museum will take you all the way from the Middle Ages to the modern day.

Walk along the river on the same side as the Museum. Until you come to the foot Bridge that looks like a sail.

This is the image called to mind by the Zubizuri (in the Basque language “zuri” translates to white and ‘zubi’ to bridge), and also known as the ‘Calatrava bridge’ in reference to the famous Spanish architect who designed it. This arching white structure connects the two banks of the estuary at the level of the Paseo de Uribitarte and the Campo Volantín.

Inaugurated in 1997, at the same time the Guggenheim Museum opened, both instantly became the symbol of the ‘new’ Bilbao.

3. Take a bird’s-eye view of Bilbao

We now head up the green hill just northeast of the city’s Castaños district. Cross over the Puente Zubizuri, make a left on Paseo Campo de Volantin and take the next right on C/ Múgica y Butrón. Plaza Funicular is two blocks straight ahead.

The train, which covers 770m  in three minutes, runs every 15 minutes until 10 pm on weekdays and 11 pm on weekends. You can just as easily walk up the hill from the plaza, though that three-minute rail jaunt will be more like 20 minutes on foot.

Read more about the Artxanda´s Funicular

After your ride up the mountain, head back to the riverbanks and carryon walking until you see the imposing grand ayuntamiento (town hall).

Established in 1892, this Baroque-style building occupies the site of a former convent. Architect Joaquín Rucoba designed this local institution which sits just steps away from the Nervión river and the Puente del Ayuntamiento. To visit the City Hall, make sure to schedule a tour in advance.

Read more about the Bilbao Ayuntamiento

Head back through the Areatzako parkea along the El Paseo del Arenal before heading towards the Plaza Nueva.

Apart from its architectural value (it is a good example of Roman neoclassical purity) the Plaza Nueva has the character of an urban reference point. This is helped by the colonnade and arches, where the restaurants and bars keeps the atmosphere lively all day. It was inaugurated in 1851, after a complex construction process that lasted sixty-five years. Since then, it has never lost its leading role, something which you see particularly on Sundays, when there is a market for public and for collectors.

6. Visit the Seven Streets of the Old Quarter

When the city of Bilbao was founded over 700 years ago, its inhabitants made their living from market gardens and fishing, and the river was beginning to emerge as the best means of communication with the outside world. There were at that time two different centres of population; on the one hand, the left bank or Bilbao la Vieja, which was a mining area where iron was worked in the foundries, and secondly, the right bank, called the Old Quarter (“Casco Viejo”), which engaged in commerce and port activities.

The heart of the Old Quarter was surrounded by walls and consisted of three parallel streets. Later it became necessary to take down the walls and build four streets perpendicular to the river, which along with the first three, make up what is known today as the Seven Streets. Since 1979, this area has been a pedestrian precinct, effectively becoming a shopping centre of 240,000 square metres, with hundreds of commercial establishments, bars and restaurants.

The 1983 floods were the greatest catastrophe to hit the city of Bilbao in living memory and devastated and destroyed the Old Quarter. Despite the devastation, the Casco Viejo or Old Town managed to re-emerge and become one of the leading tourist and commercial areas of the city.

While in the Old Quarter, you might visit the Catedral de Santiago, Plaza Santiago, which was built in the 14th century and then restored in the 16th century after a fi re. The cathedral’s facade was rebuilt in the 19th century. It is open daily 11am to 1pm and 4 to 6:30pm.

To the south of the Old Quarter on the riverbank lies the Art Nouveau Mercado de la Ribera.

Ribera Market, located beside the river estuary in Bilbao, is a reference in terms of shopping for the whole of Biscay. One of its many merits is to have been recognized in 1990 as the most complete municipal food market by the Guinness Book of Records, at that time being the largest in terms of traders and stalls and the biggest covered market as regards space in the whole of Europe, with a surface area of 10,000 square metres.

Refurbishment work began in 2009 aimed at renewing its structure, stalls and services in order to remain a reference for shoppers in the 21st century. Not in vain, life and business have never stopped in this space where more than 60 merchants manage to provide customers with the finest produce at the best price: meat, fruit, shellfish, cheeses, cooked meats, frozen food, mushrooms and fungi…

Head back through the Old Quarter to Plaza del Arriaga and Teatro Arriaga.

The Arriaga Theatre is a very beautiful building. Inspired in the Paris Opera, it was the work of the municipal architect Joaquín Rucoba and was opened in 1890. In 1902 it was named in honour of the Bilbao musician Juan Crisóstomo Arriaga, known as the Spanish Mozart because of his talent (at 13 he composed his first opera and shortly before the age of 20 he died of tuberculosis). Today, the Arriaga continuously hosts the city’s programmes of music and theatre. Like other buildings in the Old Quarter of Bilbao, it was badly damaged in the floods of 1983.

Read more about the Teatro Arriaga

Cross the bridge and head back towards the Guggenheim.

Stroll through the most iconic lane in Bilbao and, as sunlight streams in through the trees and highlights the quaint and colourful buildings at the side, watch the how the olden day culture of the city has merged with modernity. Fancy shops, eateries, big banks and pharmacies accompany 19th century buildings at the Gran Via de Don Diego Lopez de Haro, a road filled with history as well as contemporary comforts.

Read more about the Gran Vía

Where to Park in Bilbao

Parking meters are distributed at strategic points along the streets of Bilbao for obtaining a ticket. There are various methods of payment and the timetable is from 9:00 to 13:30 and from 15:00 to 20:00 h, Mondays to Fridays (in the central zones on Saturdays too). Option to extend the meter time remotely.

The streets of Bilbao in which the OTA system is applicable are divided into 12 geographical zones, and are painted in two colours depending on the maximum permitted time for parking. These are Green (5 hours) or Blue (2 hours). Mobile application for Bilbao Park.

Regrettably, the lot where many patrons to the Guggenheim Museum park is the scene of countless car robberies. The lot is not run by the museum, and the museum is in no way responsible for the thefts that take place there. But many visitors stop off at the Guggenheim in cars filled with luggage, intending to spend the night elsewhere along the Basque coast. Even if luggage is locked in the boot, these thefts in broad daylight are commonplace. In most cases, the police seem to offer little assistance, and the lot appears unguarded. Be warned that your property is at great risk if you leave your car in the lot while you spend 2 or 3 hours enjoying the museum. Consider parking further a field or arriving by bus or taxi instead. 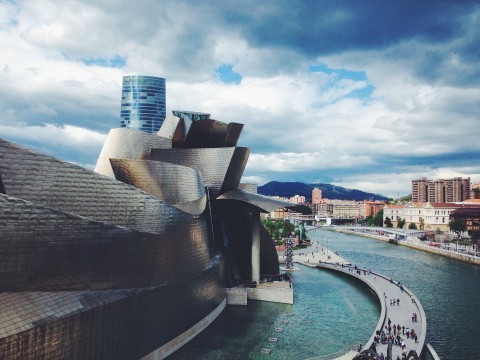 Located in the northern mountain range lies Bilbao, is one of the most cosmopolitan and cool cities of the Basque Country. Its credentials are no doubt significantly boosted when the Frank Gehry–designed Guggenheim Museum. 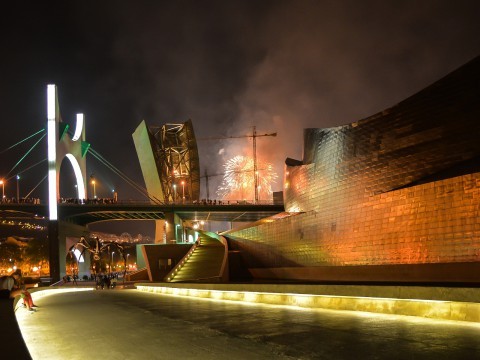 Best Things to do in Bilbao

In the last 20 years or so, the Basque city of Bilbao has become a major cultural and economic center – from Game of Thrones locations to the glittering Guggenheim, fine art, and excellent pinxtos. Here are very best things to do in Bilbao.