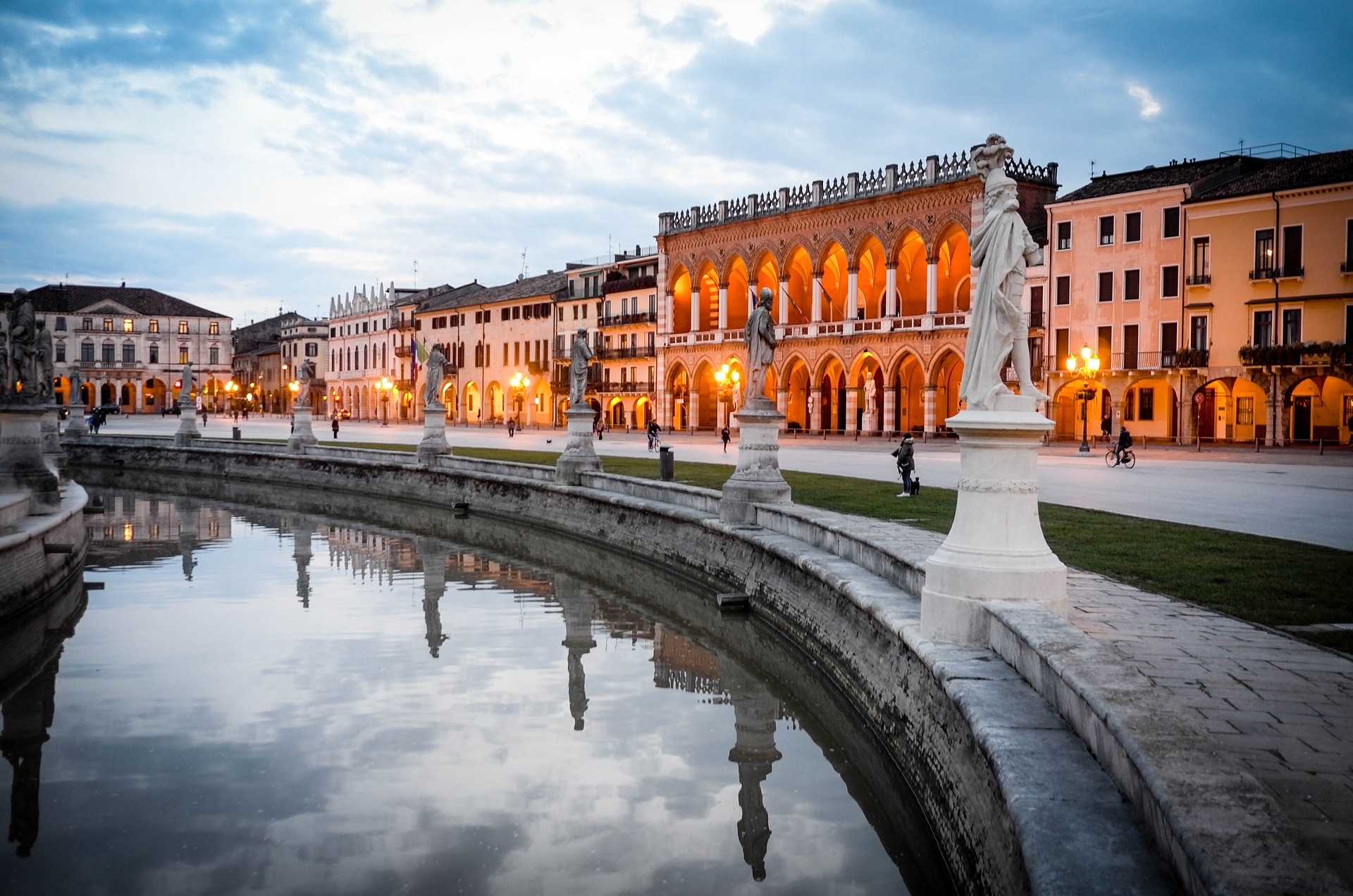 Padua is home to the second oldest university in Italy (the oldest is in Bologna). This, plus the historical wealth of the city, has created a legacy of grand buildings, many filled with the medieval frescoes for which Padua is famous. There is an Italian popular saying: “Venice is beautiful, Padua is her sister”.

it has two UNESCO’s World Heritage Site list. Once for its 14th-century frescoes and another for its Orto Botanico – the oldest academic botanical garden in the world!

It is also an important place of pilgrimage: St Anthony is buried in Padua and the 25 km Walk of Saint Anthony ends here. Then there is the Shakespeare connection: this was the setting for his play Taming of the Shrew. As you walk the shady colonnaded streets you can imagine yourself back in that world, in the place that Petruchio describes as “fair Padua, nursery of the arts”.

The largest and most popular piazza in Padua is Prato della Valle. This massive square or actually an ellipse shape is surrounded by a canal edged with 78 statues of notable Paduans. The piazza itself is a favourite meeting place and home to a daily food market and occasional weekend antiques markets.

Walk straight through the oval park, then walk clockwise around it before turning onto Via Beato Luca Belludi. Quickly turn off to the right to walk down the pedestrianised Via Donatello, after 200m you arrive at the University of Padua Botanical Gardens.

The Orto Botanico di Padova is a botanical garden in Padua, in the northeastern part of Italy. Founded in 1545 by the Venetian Republic, it is the world’s oldest academic botanical garden that is still in its original location. The garden – affiliated with the University of Padua – currently covers roughly 22,000 square meters, and is known for its special collections and historical design.

Read more about the Orto Botanico

Head back to the entrance of the gardens. After crossing the small bridge, turn off Via Donatello and walk up Via Orto Botanico until you reach the Piazza del Santo.

One of the main reasons for visiting the Piazza del Santo is it see the Equestrian Statue of Gattamelata. It is one of the most famous statues in Italy, made by Donatello in 1446, it represents Erasmo da Narni, who was a soldier fighting for the church and for the Venetian Republic. His nickname was Gattamelata. It was the first equestrian statue of this size since antiquity and was commissioned by the soldier’s wife and son.

Dominating the Piazza del Santo  is the Basilica of Sant’Antonio. It is an important religious site because inside you can find the tomb of Saint Anthony, who is the saint of the city of Padua. Saint Anthony was known for helping children and the poor and today the Basilica is a popular pilgrimage site – with over 5 million pilgrims visiting each year.

MUSME - Museum of the History of Medicine

MUSME is a collection of exhibits that describe the history of medicine. Since the University of Padua houses one of the oldest medical schools in the world, it is fitting for this museum to be located in the historic center of Padua, within walking distance of the medical school. Exhibits explain gross anatomy, the development of pharmacology, surgery and also focus on the evolution of medical education.

Read more about the MUSME - Museum of the History of Medicine

Come out of the building and turn right onto Via S. Francesco. You will pass Piazza Antenore which has the Tomb of Anthenor. This is a historical medieval tomb, falsely attributed to the mythical founder of Padua, more probably the remains of a Hungarian warrior and not the Trio prince.

Opposite this is the Palazzo Romanin Jacur. A 14century palace that Dante lived in Padua during his exile.

At the end of the piazza is the location of the Ponte San Lorenzo, the remains of a segmental stone bridge with 3 arches, built by the Romans from 47—30 BCE. Unfortunately now inaccessible and not visible from the street.

At the next block turn north onto Via VIII Febbraio to reach Palazzo Bo.

Take a guided tour of the University of Padova, one of the oldest in Europe, where Galileo taught for a dozen years, and which awarded the first Ph.D. in the world to a woman in the 17th century). It is a fabulous renaissance building and tiered courtyard that housed the main campus of the University of Padua’s medical school for centuries. As such, it is decorated to the hilt with the family crests of all the illustrious teachers and alumni who have walked these old stone floors.

Look out for the lectern where Galileo taught!

Read more about the Palazzo Bo

Carry on north on Via VIII Febbraio to reach Piazzetta Cappellato Pedrocchi, or to skip it take first left to go straight up Via Guglielmo Oberdan another bloack to see Pedrocchi Café.
.

Walk past the historic Pedrocchi Café. Known for its part in the 1848 riots against the Habsburg monarchy, as well as for being an attraction for artists over the last century from the French novelist Stendhal to Lord Byron to the Italian writer Dario Fo. Pricing is as you would expect for a historic building.

Read more about the Cafe Pedrocchi

From Pedrocchi Café turn left down Via Goriza and left at the end to reach Piazza della frutta, a bstling square known for its fruit-&-vegetable market, 12th-century tower & historic city court, which also holds the Ragione Palace.

It is worth visiting Palazzo Della Ragione and you should make time to go inside to see the frescoes. It is a stunning medieval town hall that was built in the 13th century. There are three floors, the underground has Roman ruins but is not always accessible to the public. Secondly, the ground floor is a wonderful place to get something to eat because it is full of cafes and then finally the top floor is where you will find the frescoes.

A short walk along the Via S. Clemente brings you to Piazza dei Signori.

Piazza Dei Signori is another wonderful piazza in Padua, Italy. This is because of the magnificent astronomical clock tower that stands proudly in the square. You will soon notice that there are 11 out of the 12 zodiac signs (Libra is missing) and it follows the geocentric model of the solar system.

Although the interior of the Duomo is quite simple, it is worth to visit this beautiful renaissance style church.  There is separate entry to the baptistry so you do not need to go in via the cathedral, which costs 3 euros. The 12 century baptistry of the Duomo contains one of the most complete medieval fresco cycles to survive in Italy.
Read more about the Duomo di Padova

This beautiful Roman bridge; erected between 30 and 40 BC, and then restored in medieval times. Its structure is similar to that of other bridges in the city, compared to which it is larger and wider, and it is one of the oldest among those still crossed by vehicles.  It leads to the Molina gate. it takes its name from the hydraulic mills housed under its arches.

Read more about the Ponte Molino

The palazzo is home to the Museum of Applied and Decorative Arts, with over two thousand exhibits that might be called the hidden patrimony of the Padua City Museums. It also houses the Museo Bottacin, which has a rich collection of medals and coins. The neoclassical facade of the building has elements influenced by the Liberty style – the Italian version of Art Nouveau.

Part of the Eremitani Civic Museums complex, the palazzo houses the Museum of Applied and Decorative Arts and the Bottacin Museum in its rooms. The museum complex is headquartered in Piazza Eremitani, in the cloisters of the former Augustinian monastery adjacent to the Church of the Eremitani. But the Eremitani Civic Museums encompasses a series of monumental sites and various museums located in different buildings in Padua, showcasing an expansive collection ranging from archaeological objects to medieval and modern art.

The Roman Arena and the Arena Gardens

The Roman Arena of Padua was an amphitheatre used for gladiator games in the ancient Patavium. The Arena ruins are now part of the Giardini dell’Arena park. Today, only a few ruins remain part of the bearing walls and a series of arches. The remains of the Arena have recently undergone a cleaning and restoration process. In parallel, an excavation project is also underway to bring to light the original structures of the Arena, floors and foundations, buried over the centuries by numerous stratifications and subsequent building works.

Read more about the Giardini dell’Arena

The Scrovegni Chapel houses one of the most outstanding masterpieces of figurative art of all time, the complete fresco cycle created by the great Florentine artist Giotto. 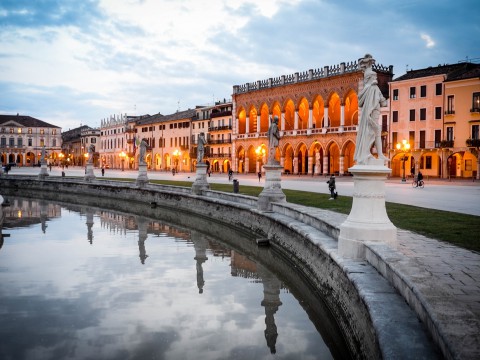 Padua is home to the second oldest university in Italy (the oldest is in Bologna). This, plus the historical wealth of the city, has created a legacy of grand buildings, many filled with the medieval frescoes for which Padua is famous.