Town in Isle of Skye

Portree, the main town on the Isle of Skye, situated on the east side of Skye overlooking a sheltered bay, is the capital of the island. It is surrounded by hills – Ben Tianavaig to the south and Suidh Fhinn or Fingal’s Seat to the west, both about 1000ft (413m and 312m respectively) and Ben Chrachaig, much lower (144m) to the north. Further north along the road to Staffin is the Old Man of Storr – a very popular walk. Across the bay to the east, the Island of Raasay can be seen with its distinctive conical hill, Dun Caan.

Portree is only about 200 years old and was created as a fishing village at the beginning of the 19th century by the then Lord MacDonald. The name Portree or Port Righ, King’s Port in Gaelic, (as on the road signs) is popularly thought to derive from a visit by King James V (of Scotland) in 1540 but the area around the harbour was called Portree or Portray long before the arrival of the king. Its name really comes from the Gaelic for Port on the Slope.

The village has banks, churches, cafes and restaurants, a cinema at the Aros Centre, a swimming pool and library at the school, gift and book shops, a tourist information centre, petrol filling stations and supermarkets, one in the village and a larger one out on the Dunvegan Road.

The village hosts numerous annual events, such as the Portree Show, the Isle of Skye half marathon and the Islands largest event the Skye Highland Games drawing visitors and locals alike.

A visit to the tourist office before leaving Portree is advisable. It is well sign posted and staffed by helpfully well informed locals. They equip visitors with maps and printable directions to attractions throughout the island. 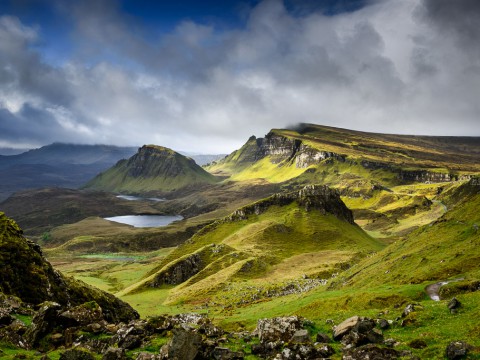