North Leigh Roman Villa was a Roman courtyard villa in the Evenlode Valley about 0.5 miles (800 m) north of the hamlet of East End in North Leigh civil parish in Oxfordshire. It is a scheduled monument[1] in the care of English Heritage and is open to the public.

It was enlarged over time from the late 1st c. AD to the early 5th c. and eventually became a very large, luxurious villa rustica with 19 mosaic floors, and included a large agricultural estate with housing for farm workers and possibly slaves. Life there was very comfortable with access to the best local agricultural products and imported luxuries from sophisticated nearby towns such as Cirencester.

The Roman circus of Toledo is an Ancient Roman circus site of Hispania, located in present-day Toledo, Castilla-La Mancha, Spain.
The circus at Toletum (Toledo) was built during the 1st century, during the mandate of the emperor Augustus or the emperor Tiberius. Possibly, its construction was included within the plan that the emperor undertook throughout the Empire to endow all the great cities with public buildings, like thermae, theaters, amphitheaters, or forums, with the aim of promoting the Romanization in these zones. In particular, the Roman circus was located in the north of the Roman city.

Given the size of the Circus, as it happened in almost all Hispanic-Roman cities, it was located on the outskirts of the walled enclosure. It is certain that from the city there was a causeway to the circus, which has not been found.

On the other hand, next to this was located another infrastructure dedicated to leisure: the Roman Theater, just where currently the sports facilities of the college located next to the Circus. The vestiges that came to the 20th century are recorded, although the use of the land for other purposes has prevented the value of the remains. Checking the difference between the level of the ground between the excavated remains of the circus and the surrounding plot, it is possible that under the subsoil part of the theater as the scene are preserved, part of the scenic front and the first stands. In addition, the location of sports facilities on that site (whose need to take advantage of part of the subsoil is zero), will have allowed its conservation in an acceptable situation. 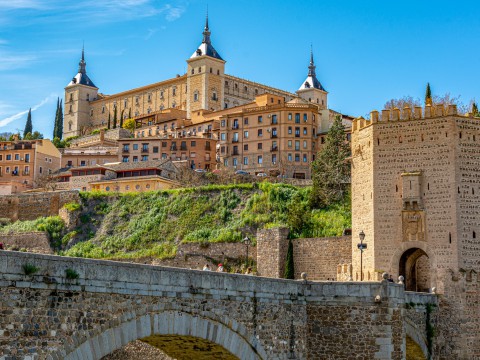 Self Guided Walking Tour of Toledo (with maps!)

Toledo is the heart and soul of Spain and an incredibly cultural city. It has seen numerous cultures and dynasties pass through its walls, as well as wars, royalty and artists.