Cilurnum is considered to be the best preserved Roman cavalry fort along Hadrian’s Wall. The site is now preserved by English Heritage as Chesters Roman Fort. There is a museum on the site, housing finds from the fort and elsewhere along the wall.

Cilurnum or Cilurvum was a fort on Hadrian’s Wall mentioned in the Notitia Dignitatum. It is now identified with the fort found at Chesters near the village of Walwick, Northumberland, England. It was built in 123 AD, just after the wall’s completion.

The site guarded a bridge, Chesters Bridge, carrying the Military Way Roman road behind the wall across the River North Tyne. Massive abutments survive of this bridge across the river from the fort. Cilurnum was a cavalry fort at its foundation, for retaliatory raids into barbarian areas north of the wall, then given over to infantry later. Hadrian himself encouraged the “Cult of Disciplina” among legions stationed at the wall, and an early inscription on an altar dedicated to Disciplina, found in 1978, indicates the earliest known military presence was a wing of cavalry, ala Augusta ob virtutem appellata (“named Augusta because of its valour”). Inscriptions have also been found showing the Cohors I Delmatarum, from present-day Bosnia-Herzegovina (Yugoslavia), and the Cohors I Vangionum from Upper Rhineland in Germany were also stationed here.

Four large Roman columns, believed to come from Cilurnum, may be seen supporting the south aisle in the church of St Giles at Chollerton, a couple of miles upstream from the fort. 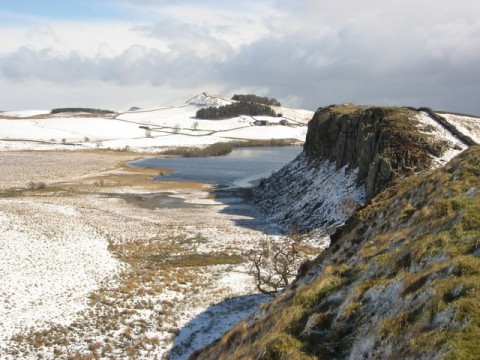 You start at the Great Whin Sill at Cawfields Quarry – the volcanic plateau which large sections of the Wall are built on, before descending to Once Brewed and a visit to The Sill: National Landscape Discovery Centre. Heading out from Once Brewed you’ll soon be up on the Wall again and viewing one of the trails best scenes.