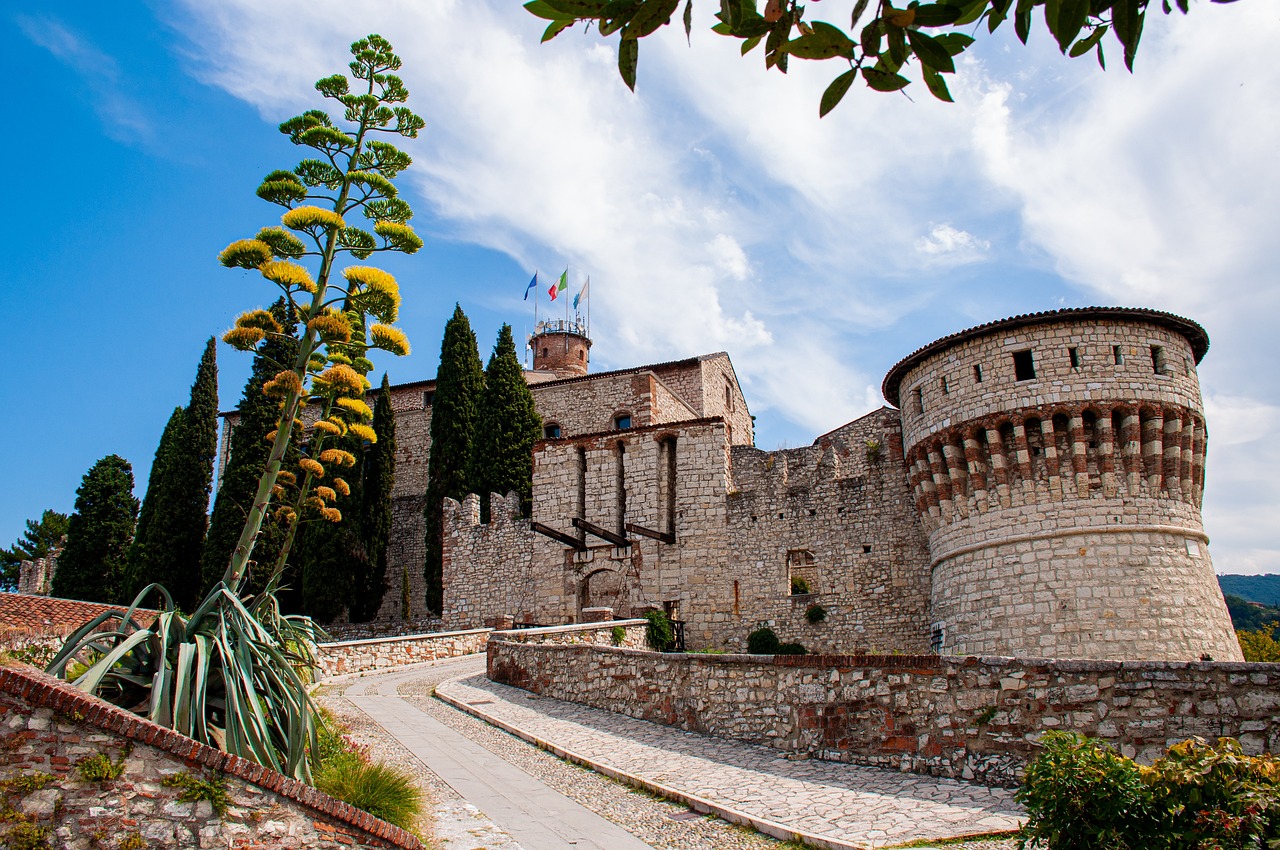 Every year thousands of people flock to Lake Garda in northern Italy to experience its picture perfect towns, clear mountain water and natural wonders. But just beyond the lake’s shores lies a region bursting with a rich history. The cities of Verona and Vicenza are popular destinations while Brescia is often overlooked.

The historic centre is attractive: the sloping roofs and balconies of many of the buildings are reminiscent of an Alpine town in Switzerland. However, Brescia is Italian – it offers all the style you would expect from a country known for its rich history and artistic flair. The historic centre’s narrow streets give way to large squares flanked by porticoes packed with restaurants, cafés, bars and shops, making it a pleasant place for a stroll, peeking through intricate large wrought-iron gates that shield courtyards housing fountains and statues.

We will discuss a few of the highlights of a trip to Brescia.

Driving too close to the historic centre is a little dangerous as the area between Piazza Loggia-Piazza Paolo VI squares and Corso Zanardelli is a pedestrian and restricted access (ZTL) area, monitored through video surveillance. Accidentally drive there and you can get a healthy fine.

There is plenty of parking towards the train station. You can also go for parking in Freccia Rossa Mall. Buy something in the mall and parking is free!

Piazza Paolo VI is part of the historical centre of Brescia, previously it was also known as Piazza del Duomo due to the presence of the two cathedrals of the city, and it was named after Pope Paul VI.

Palazzo Broletto, which today includes the Civic Tower (Torre del Pegol) and Loggia delle Grida, located on the northeastern side of the square, dating back to the 13th century. Broletto is the symbol of the democratic-political power since the middle age although can seems rather insignificant besides the huge, stunning “new cathedral” and the early-medieval “old cathedral”. Today it houses the Prefecture, the Provincial Administration and some municipal offices.

Read more about the Broletto and Piazza Paolo VI

On the eastern part of the square, we can also find the New Cathedral of Brescia (Duomo Nuovo), built between 1604 and 1825 (it took a while to build due to due to financial difficulties), in various architectural styles ranging from late Baroque to Rococo. It was designed by architect Giovanbattista Lantana and built on the remains of the old San Pietro de Dom church. It has a splendid Baroque façade in Botticino marble and it’s dome is the third tallest in Italy.

The Duomo Nuovo has eight chapels, although these are really no more than niches. The interior, a one-nave Greek cross design, is very monumental and contains several noteworthy works of art. Look out for the 15th century wooden crucifix on the first altar on the right; Isaac’s Sacrifice painted by Moretto in the lunette of the same altar; and St. Apollonio’s sarcophagus in the third altar (he was Bishop of Brescia in the 3rd century), made in 1510 and decorated with high-reliefs attributed to Maffeo Olivieri. In the Trinity Chapel, the altarpiece by Giuseppe Nuvolone is noteworthy; it’s a grandiose ex voto to celebrate the end of the plague in 1630.

The next structure is the Old Cathedral (Duomo Vecchio), known also as La Rotonda, an example of Romanesque architecture from the 11th century. Duomo Vecchio was built starting from 1100 by a very old Corporation of specialised masons. Also called “Rotunda” for its circular shape, it is the official co-cathedral of Brescia together with Duomo Nuovo.

Read more about the Duomo Nuovo (New Cathedral) and Rotonda

Santa Maria della Carità, is also known as the Church of the Good Shepherd , and is one of the most exciting expressions of the Baroque in the city. This temple of art and spirituality was built in the 16th century to be rebuilt in 1640 and finished in 1825 with the raising of the large cross on the dome. The sculptural and pictorial ornaments on the facade date back to the first half of the 18th century.

Inside, the sumptuous high altar stands out , one of the most beautiful in Brescia, with the image of the Virgin of the Terragli placed in the second half of the seventeenth century and behind which a chapel similar to the Holy House of Nazareth was built , the original of which is kept in Loreto, and the splendid octagonal floor with polychrome marble.

The result is a perfect integration with the stuccoes and frescoes of the walls and with the architectural perspectives of the dome.

The Piazza del Foro is one of the oldest squares in Brescia, as it was the centre of the political life of Roman Brixia. The square is framed by ancient palaces and residences. From Roman times date the Tempio Capitolino and the Basilica, which served as a courthouse at that time. The Roman columns that are still standing, used to be in front of shop spaces. The Palazzo Martinengo is graced by the Fountain of Neptune and the statue of Cesare IV Martinengo.

Opposite the Capitolium Theatre are the small Baroque church of San Zeno al Foro and the remains of the porches that ran around the square perimeter. The ground level at the time was much lower than today‘s and these remains give a great perspective of where the city was in those old days. By the square, surrounded by historic aristocratic residences, stands Palazzo Martinengo, built in the 17th century and used today to host temporary exhibitions. It also contains a wooden scale model of the whole area giving you a true window over the past of the city.

Read more about the Piazza del Foro and Roman Theater

Santa Giulia Museum is one of the main tourist and cultural attractions of Brescia. Also known as “City Museum”, its important historic displays and fascinating location make it a unique site. It’s an exceptional example of former monastery turned into a museum. It hosts incredible collections from Prehistory to the present day and temporary exhibitions of international relevance.

Together with the Capitolium archaeological area and the San Salvatore monastery complex, Santa Giulia Museum is a UNESCO World Heritage Site.

Brescia’s Castle stands perched on Cidneo hill and many Brescians consider it the symbol of the city. The castle still bearing the traces of the various dominations of the past. The Mastio, the fortified keep on the top of the hill, with its mighty Torre dei Prigionieri (Tower of the Prisoners), the drawbridge and the Mirabella Tower, the last trace of the church of Santo Stefano in Arce overlooking the town, bear witness to the communal period and the Visconti domination. The imposing bastions, with their monumental gate, are testaments to the power of the Republic of Venice – La Serenissima – that ruled the city for about four centuries.

Read more about the Brescia Castle

Piazza Loggia, one of the three main squares in Brescia. Palazzo della Loggia is a beautiful palace built in Renaissance style in Brescia, located in the square of the same name, today the seat of the city’s Municipal Council. On the east side of the square are elegant porches with the Clock Tower surmounted by two automatons who strike the hours.

Palazzo Loggia was built between 1492 and 1570, like the square that hosts it, it presents itself in its grandeur and at the same time with a simple and clean style. The façade, made of Botticino marble, has columns and pilasters with rich sculptural decorations. In the lower part you cannot fail to notice the large portico , accessible from three sides through three large arches and today often used for events and musical moments. Also under the portico there are two fountains also made in Botticino marble. 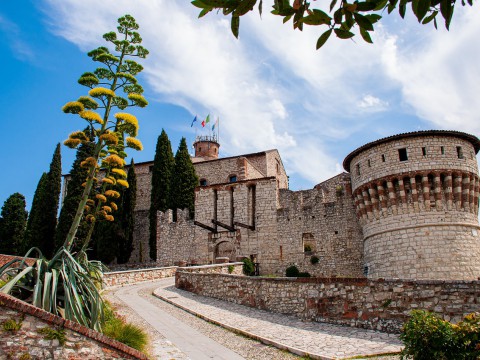