This picturesque lochside village provides great opportunities for fishing, walking, climbing and sailing. As soon as you’re off the beaten track on one of the many walking routes in the area, there’s a good chance you’ll catch sight of red squirrels, pine marten, deer, eagles or seals. The narrows at Strome (An Sròm; meaning the current, from Norse) create strong tidal currents resulting in rich marine communities – bottlenose dolphins can sometimes be seen in the loch and it’s a great place for underwater photography – the flame shell reef here was recently declared a Marine Protected Area. The exposed estuary at low tide also makes it a great place for the keen bird watcher and oystercatcher, curlew, redshank and greenshank are regularly found here. The village offers a range of local services and the Lochcarron Producers’ days (last Friday of every month, April – October) offers a chance to buy top quality local produce. There’s a vibrant community in Lochcarron and the community-owned Kirkton Woodland and Smithy Hub provide many facilities and activities for visitors and locals alike.

Village and Walk in Wester Ross

The village of Shieldaig is in a superb location and is perhaps best viewed from across the loch on the Applecross coast road. From here the village can be seen sitting below the mighty mountains of Torridon. Shieldaig was established in 1800 as a planned fishing village to encourage families into fishing and to build up a stock of trained seamen for the Royal Navy, during the Napoleonic wars. Grants from the Admiralty for house and boat building stopped in 1815 but Shieldaig continued to grow because the loch was well-known for its herring. The distinctive pine trees on Shieldaig Island, were planted to provide poles for drying fishermen’s nets but now provide a nesting site for a pair of white-tailed eagles (sometimes called sea eagles). From the front of Shieldaig village common seals can be seen at close quarters, along with eider ducks, oystercatchers and shags. The village has a range of tourist services and marine wildlife watching tours can be taken from the pontoon. From the north of the village there is a good path that takes you around the Shieldaig peninsula. Allow around an hour for the walk which has many lovely spots to admire the shoreline and look for otters and herons.

Burgh by Sands is a village situated near the Solway Firth and Carlisle in the north of England.

It is the site of a Roman Fort of Hadrian’s Wall called Aballava. The village has been occupied continuously since Roman times. Following the end of the Roman Empire in 410AD stones from the wall provided a stones for buildings all around, from St. Michael’s Church, to manors, farmhouses and barns.

The powerful Medieval King, Edward I of England also known as ‘Edward Longshanks’ or ‘The Hammer of the Scots’ died here in 1307. When he arrived, on his way to war against the Scots and Robert the Bruce, he was in poor health.  He had camped on the marsh in a place where his army could cross to Scotland at low tide and died on 7th July .  King Edward’s body lay in St Michael’s Church in Burgh by Sands until it was taken to Westminster Abbey. A monument was erected in 1685 on Burgh Marsh marks the spot where he died. After a period of decay another was erected by the late Earl of Lonsdale, in 1803.  On the 700th Anniversary of his death a statue was of Edward was also erected in the village.

This 12-century St. Michael’s Church was probably erected upon the foundations of an earlier building. The stone carvings of mythological beasts in the undercroft are thought to be Anglo Saxon. In the 14th century with almost continuous cross-border warfare the inhabitants decided to build the west tower of the Church as a place of refuge from attack. The western end housed the bells, while the eastern tower protected the priest from Scottish raids! Later, in the 16th century, the notorious Border Reivers terrorized the area, from both sides of the border – the word “bereaved” being derived from their title.

It has been suggested that Burgh by Sands could be the location of Avalon and where King Arthur died. While many say the link is tenuous at best, there are some interesting clues that could point to it being a contender. The famous Welsh historian, Geoffrey of Monmouth, wrote in his “Historia Regum Brittaniae” where he described Avalon as “a magical place, rich in apples”. The Roman fort name Aballava also derives from apple. It’s also been suggested that Excalibur was forged there. 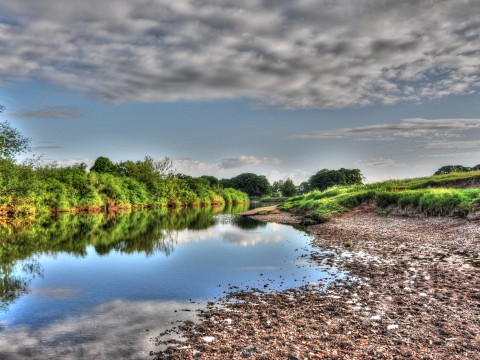 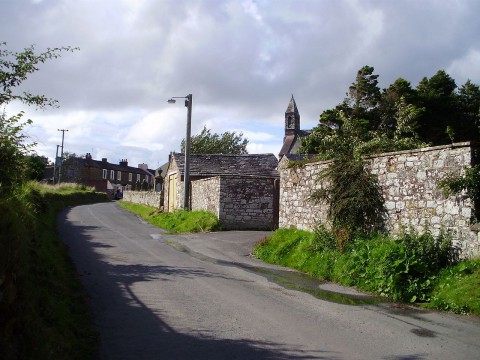 Due to logistics, I had decided that it was easier to stay in Carlisle for two nights and take the bus out to the starting point of Bowness-on-Solway on the first morning. Bowness-on-Solway is the site of the second largest Roman fort, Maia and this section of the walk enjoys coastal views across the Solway Firth to Scotland.